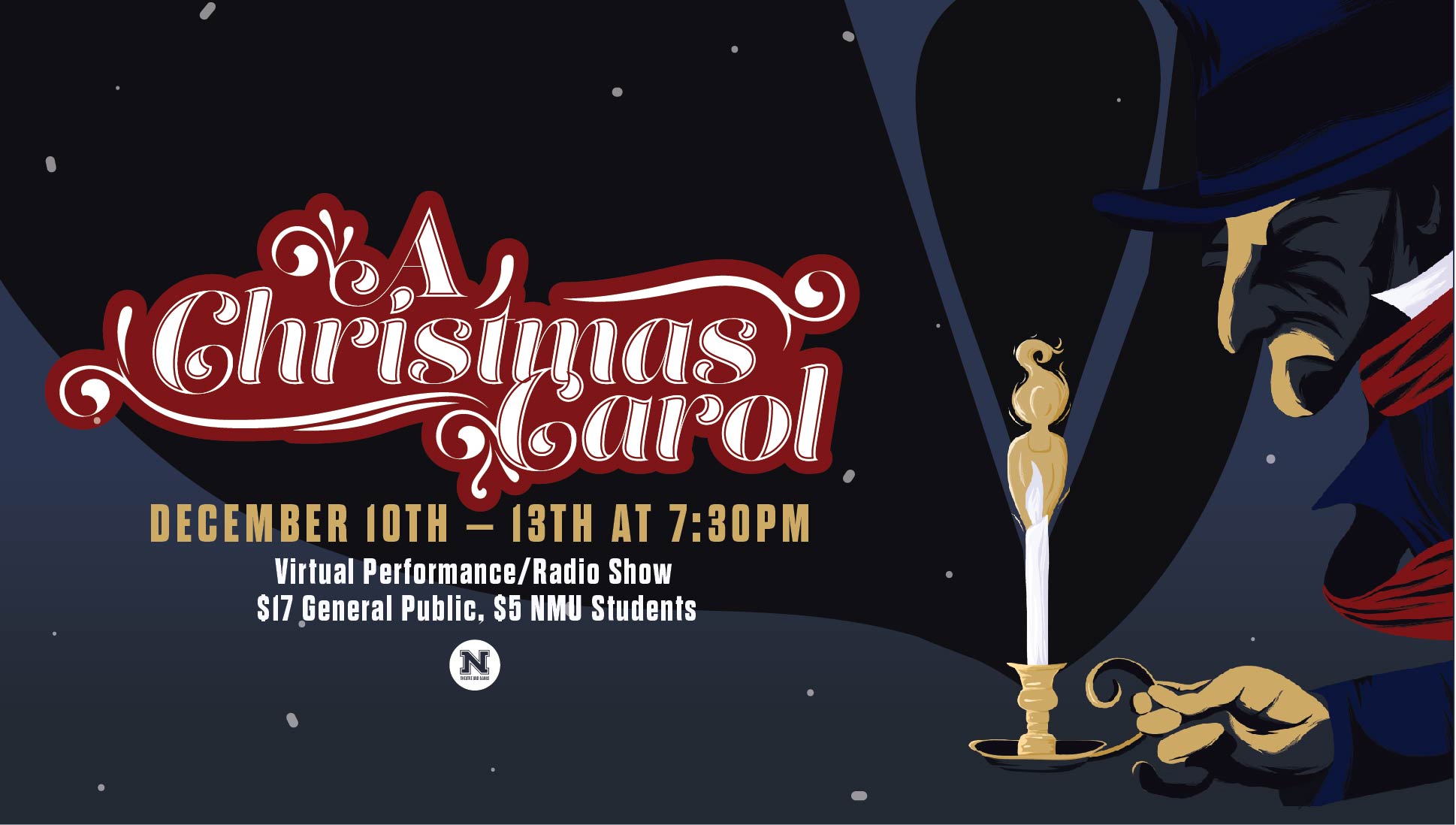 A Charming Revisit of a Holiday Classic
Adapted by Paul Truckey
Charles Dickens’ infamous tale comes to life in a whole new way in this radio broadcast. The story is the same: three ghosts take Ebenezer Scrooge on a thrilling journey to teach him the true meaning of Christmas… before it’s too late. Join us for a family favorite will leave nobody saying, “Bah Humbug!” Please note: In adhering to Northern Michigan University's guidelines, this production had to be recorded remotely and will be made available as a radio show.

A link to the virtual performance will be emailed to ticket holders before their chosen date.

Write a letter to Santa here!

Megan Hibbard (Narrator) is a junior pursuing a BA in theatre with a focus in lighting design and double minoring in art and design and dance. She loves to be on and behind the FRT stage! In the past she has been in Beauty and the Beast, Lisa in Mamma Mia!, and a dancer, choreographer, and assistant lighting designer for What We Leave Behind, and she also worked on Cats as Bombalurina and assistant lighting designer. She is so excited to be creating with everyone again, and wants to thank the entire team, her family, and her friends for encouraging her throughout this process!

Aaron Knaus (Jacob Marley) is a lifelong Yooper resident who is studying theatre performance at NMU. Aside from being an actor, he's also an avid storyteller of weird fiction and a dedicated keyboardist of the keys of old.

Seth Bowen (Boy/Mr. Fezziwig/Young Ebenezer/Peter Cratchit/Caroler) is a senior BFA theatre technology and design candidate and plans on becoming a professor of theatre someday! He is originally from Rhinelander, WI and has taken part in many different performances here at NMU, including Sweeney Todd (Police Officer/Ensemble), Scrooge! 2018 (Bob Cratchit), Medieval Dinner Theatre (Pan Piper), Beauty and the Beast (Ensemble), The Full Monty (Malcolm), and Cats (Gus). He was also the scenic and props designer for What If, which was performed as part of the recent North x North Coast Arts and Cultural Festival. Seth is happy to contribute his vocal talents for A Christmas Carol, and hopes that as you follow the story, you find some wonderful Christmas spirit. Merry Christmas!

Ashley Gardner (Young Lady) is a senior at Northern Michigan University and is currently a theatre major planning to become a voice actress. This will be Ashley’s second show at Northern, following her previous role in War of the Worlds as Nella Walker. Ashley is super excited to be a part of NMU’s theatre family and is grateful to have gotten the opportunity to be a part of such a fun and creative cast! She hopes that audiences will enjoy the show and find some comfort and joy during the holiday season. God bless us, everyone!

Toni Danz (Script Supervisor) is a third year theatre technology and design student and this is the second show she's script supervised for. Filming shows brings new and exciting aspects to the process and she's so glad to be learning new things. She hopes you enjoy the show we've put together! Happy holidays!