The Beaumier U.P. Heritage Center announces the schedule for Sonderegger 22, which will be held on Friday, November 4. This year’s symposium will be held in Northern Center Ballroom III. There will be a free lunch for attendees. In addition, at lunch the Beaumier Center will present the 2022 U.P. Folklife Awards.

This year’s theme is “Heritage Preservation and Tourism,” with nine presentations. The keynote will be delivered by Donovan Rypkema, Principal, PlaceEconomics in Washington D.C. In his address he will discuss how heritage tourism can have substantial economic benefits for local communities. But for heritage tourism to be sustainable over the long term, certain principles need to be followed. This session will discuss those principles and also share recent heritage tourism findings from US cities.

If you are not able to attend Sondregger 22 in person, you will be able to stream it live at this link, https://tinyurl.com/NMUAVStreaming.

Presentation of the U.P. Folklife Awards

The nomination process for the 2022 Upper Peninsula Folklife Awards is now open and the general public is invited to be part of this process.

Each year, the Beaumier Center requests nominations from the general public. The nominee(s) should be a person(s) or organization that has made a difference in the creation and/or preservation of the folklife of the U.P., including music, dance, storytelling, crafts, food, etc. The Merriam-Webster dictionary defines folklife as the traditions, activities, skills, and products (such as handicrafts) of a particular people or group.

After the nomination period has ended, a committee will review nominations and make the final selections. Nominations will be accepted through October 16, 2022.

To find information on how to nominate someone or organization, please visit the Beaumier Center’s website, www.nmu.edu/beaumier and click on the “Events” tab or follow this link to the online nomination form https://nmu.qualtrics.com/jfe/form/SV_agTbaCaCAx4iAS2.

The Beaumier Center will be presenting the 2022 awards at the Sonderegger Symposium on Friday, November 4.

Exhibition: Above/Under the Surface: The Fisheries of the Upper Great Lakes - Opens September 22

The Beaumier U.P. Heritage Center will open a new exhibition on the history of theUpper Great Lakes fisheries on Thursday, September 22. Entitled, “Above/Under the Surface: The Fisheries of the Upper Great Lakes,” this exhibition will look at the changes that have taken place in the fish populations and the impact of human beings on native fish species.  There will be an opening reception at 6 p.m. on Thursday, September 22 at the Beaumier Center.  The exhibition will run through December 2022 and is free and open to the public.

The history of the Upper Great Lakes fish life is central to not only the region’s ecosystem but its impact on human residents as well. For many millennia, the Great Lakes have been the home to dozens of species of fish, which is why it became such a popular region for habitation by the Indigenous people of the Midwest. With the arrival of Europeans and then the exploitation of the region’s natural resources, fish became an important part of not only our nutrition but part of the way of life of the Upper Peninsula’s residents.  This led to over fishing of many of the fish species of the region, and in some cases, their extinction. In addition, the introduction of industrial operations and human made pollution had further impacts on the health of the waters and fish populations. Lastly, the introduction of non-native species, both intentionally and by accident, has further compromised the health of Michigan’s fishery. This exhibition will explore these themes and also highlight the work that students at Northern Michigan University are doing assisting fishery activities to maintain healthy fish populations.

The Beaumier Heritage Concert Series will be pres 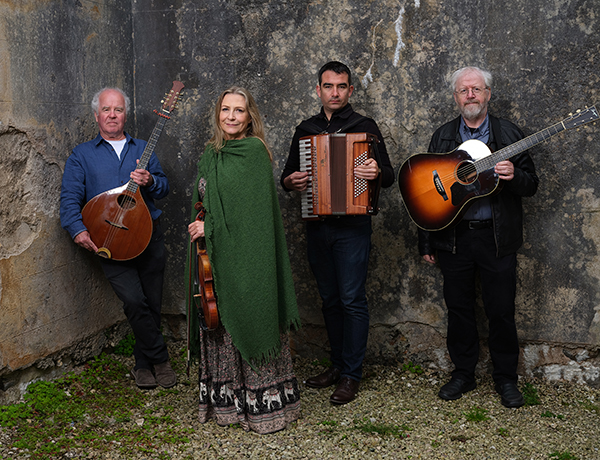 enting a concert by one of Ireland's greatest traditional music groups, Altan, on Wednesday, November 2. The concert will take place in the Northern Center Ballrooms at 7:30 p.m.  Tickets are now on sale at nmu.universitytickets.com.  Cost: General Public - $15 adv./$17 door; NMU students and ages under 18 - $10 adv./$12 door.

The spirit and sound of Altan comes from the deep and rich musical tradition of their native Co. Donegal. On one of his many visits to the Donegal Gaeltacht of Gaoth Dobhair, Belfast born flute player Frankie Kennedy met fiddler and singer Mairéad Ní Mhaonaigh, sparking off a deep musical connection, marriage in 1981, and a journey that took them all over the world. Their vision was to bring the unique repertoire of Donegal  music to the world and that mission is still as strong as ever.

In the mid 80s, Mairéad and Frankie recruited bouzouki player Ciaran Curran from Fermanagh, whose intricate counterpoint is at the center of the Altan sound, and guitarist Mark Kelly from Dublin, whose mastery of a wide palette of guitar styles and harmonic vocabulary add a breadth and depth of color. As a band, Altan played their first concert on June 1st 1985, in St. John’s Church in Listowel, Co. Kerry at the  famous Listowel Writers Week.

Their first album, simply titled Altan was released in 1987 and quickly followed by Horse with A Heart, which saw the inclusion of Paul O’Saughnessy on fiddle. Paul had joined the band on its first US tours, lending his stunning virtuosity and in-depth knowledge of the Donegal style. He performed on the subsequent three albums. In 1992, the album Harvest Storm brought with it Dáithí Sproule on guitar, himself one of the pioneers of guitar in Irish traditional and folk music, having played with the wonderful Skara Brae with the O’Domhnaill family and Buncrana native Ciaran Tourish who excelled in fiery counterpoint fiddle.

One of the band’s finest hours came with the release of Island Angel in 1993, which was recognized by Billboard World Music Charts as the second biggest selling world music album globally in 1994 and in the same year, Altan performed for Bill Clinton at the White House. The band would play for US Presidents over the course of their career as well as accompanying Irish Presidents on their state visits. Shortly after the release of this album, the legendary accordionist Dermot Byrne joined the band.

Sadly, on September 19th,1994, the band and wider world of music was dealt a devastating blow with the death of founding member Frankie Kennedy. His vision, artistry and sense of fun is still at the heart of Altan and his legacy is carried and celebrated in every note.

A record deal with Virgin  Records followed in 1996, which catapulted the band on an extensive touring schedule over the subsequent decade. This period saw them working with many of the great American performers such as Dolly Parton, recording on her album Heartsongs (1994) and its follow up, Little Sparrow 2001; she returned the favor on the band’s record The Blue Idol in 2002 by dieting with Mairéad on the song The Pretty Young Girl.

The band have traveled with Ireland's President Mary MacAleese and President Michael D. Higgins on state visits abroad to Japan, North Korea and Italy. President Higgins invited them to join him in his residence, Áras an Uachtaráin in 2018 to celebrate their 30 years as a band. The Donegal County Council held a civic reception in their offices to mark the occasion in May 2018. In 2006 the Irish Government also honored Altan by putting them on an official postal stamp  to celebrate their contribution to the Irish culture one of the highest honors to be bestowed on an Irish citizen.

Martin Tourish a past TG4 Young Musician of the Year, took the accordion seat in late 2013 and the band recorded their album The Widening Gyre in Nashville with many of the great Bluegrass and American performers, such as Mary Chapin Carpenter, Jerry Douglas and Alison Brown. This album explored the connections between Irish and Bluegrass music, a particularly special moment of which was performing at The Grand Ole Opry with Ricky Skaggs in 2016.

In 2017, the band released their first book, Altan: The Tunes,  based on a collection of 222 melodies that they collected recorded over their 30 year history. Martin Tourish transcribed the dance music and meticulously interviewed all the band members for additional stories and background information. Containing a detailed commentary on each of the tunes, it is the only collection of Donegal music currently in print.

Mairéad Ní Mhaonaigh was awarded Donegal Person of the Year in 2008 and the coveted TG4 Gradaim Ceoil (Music Award) 2017, for her musicianship and singing. The highest accolade which a traditional musician can receive in Ireland.

In celebration of the band’s latest album, The Gap of Dreams, the band has brought their music all over Europe and Ireland, the US and Canada, Japan, Australia and even North Africa. The latest album celebrates the roots of their music in Donegal folklore. It was recorded in the Attica Studios in the mountains of Donegal which contributed to a wonderful atmosphere which permeated throughout the recording. The title refers to that ‘gap’ or  ‘door’ between this and the ‘other world.’ The older fiddlers , whom they got their music from, always associated with the “other world” as  the source for their music and inspiration. They would describe poetically about encountering the fairy folk or listening to tunes on the wind or on the shore listening to the sound of the waves.

In creativity the ‘Gap of Dreams” is never shut. 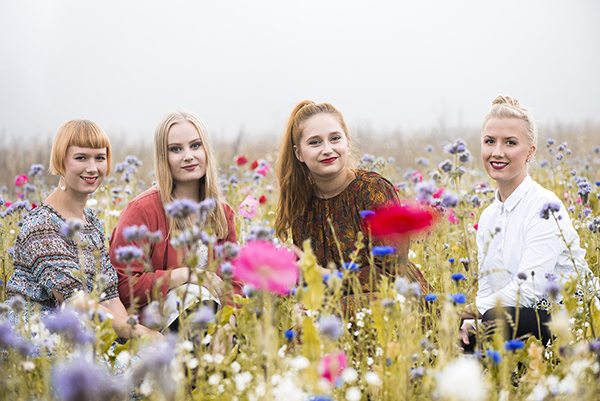 The Beaumier Heritage Concert Series is happy to announce the return of the Finnish folk group, Kardemimmit, to the campus of Northern Michigan University. Kardemimmit will perform at the Reynolds Recital Hall on Saturday, September 17 at 7:30 p.m. Tickets are now on sale at nmu.universitytickets.com. The cost is $10 for the general public; $5 for NMU students and ages under 18. Kardemimmit will spending two days in Marquette performing for students on and off-campus, at the Jacobetti Veterans Facility and with music students from NMU at their concert on Saturday night. Their residency and performance are funded in part by a grant from the Arts Midwest Gig Fund.

Kardemimmit is a band of four awesome women playing the Finnish national instrument, kantele. The band members are Maija Pokela, Jutta Rahmel, Anna Wegelius and Leeni Wegelius. Kardemimmit is in charge of their own music – they compose, as well as arrange, write lyrics and produce. Alongside 15 and 38 stringed kanteles, singing has a big part in Kardemimmit’s musical universe where original pieces with a modern approach still have a strong foundation in Finnish, Eastern European and Scandinavian traditions. The Finnish reki-singing style, 19th century dancing music and Perhonjokilaakso kantele playing style, Eastern Finnish archaic improvisation and ancient runo singing are all present in Kardemimmit’s music.

The band was founded already in 1999 in the musical institute Juvenalia in the band members’ home town Espoo. The long mutual history can be heard in their unique sound. The silvery tones of kantele flow together with the mezmerising singing harmonies. As a kantele band Kardemimmit is a pioneer: in the year 2004 Kardemimmit was nominated the Band of the Year by Kantele Association in 2004 and the next year they won the International Kantele Competition. The following years Kardemimmit has been touring extensively in Europe, North America and Japan. Kardemimmit has released five albums, Viira 2006, Kaisla 2009, Autio huvila (Abandoned Villa) 2012, Onni (Happiness) 2015 and Kesäyön valo (Midnight Sun) 2018. Kardemimmit music is featured in Muji Kamppi Helsinki, the largest Muji store in Europe, as a part of Muji BGM 24 album (2019). Kaisla was republished in 2012 as The Rough Guide to the Music of Scandinavia compilation’s bonus cd Introducing Kardemimmit. (www.worldmusic.net/scandinavia). Kardemimmit  Autio huvila was chosen as the Finnish folk album of the year 2012.

You might wonder what the band’s name means. It’s a play of words. Kardemumma is a spice that Finnish people use a lot in their sweet baking. Mimmit is a word for girls that have bold nature. That means Kardemimmit is actually the Finnish Ethno Spice Girls.