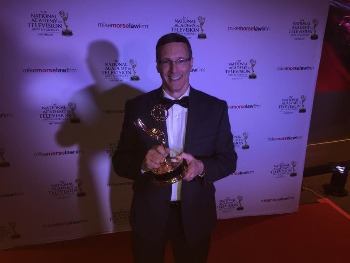 The Communication and Media Studies Department would like to congratulate Dr. Dwight Brady for earning a 2018 NMU Merit Award. Dr. Brady is known for being a highly effective teacher-scholar and providing career-building experiences and guidance for students in both the classroom and in his professional video production projects.

Dr. Brady was selected for this award due in part to four monumental tasks he accomplished:

1) Along with 14 students, Dr. Brady produced a documentary called Boxed In, which exposed a “dark store” tax loophole that prevented local municipalities from getting needed funds. The documentary won a Michigan Emmy award, bringing public attention and prestige to NMU. Furthermore, Dr. Brady worked with Michigan lawmakers to distribute his documentary among members of the state legislature. The legislature voted nearly unanimously to support a bill to close the loophole. 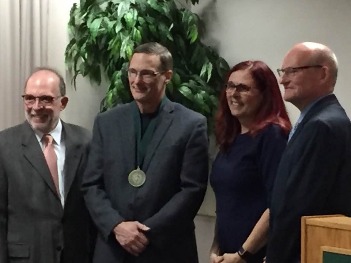 2) Dr. Brady overhauled NMU AAUP’s image and public relations by serving as the NMU AAUP information officer. In this position, he created a new website for the union, wrote press releases and articles to help the public relate to professors, and organized a rally to garner public support during the union’s contract negotiations.

4) Lastly, Dr. Brady gave vast amounts of personal time and resources to running for Congress. His goal in this civic duty was to offer all that he could to serve state and regional communities, including NMU. He employed his professional and academic expertise in media, journalism and communication, and did it “on load,” taking no time off from his university duties. This active participation in democracy is a positive reflection on NMU and provides an inspiring example of service for students and all citizens.

A faculty member from NMU’s Communication and Performance Studies Department spent three weeks in Nashville this spring getting an inside view of movie making with writer/director Howie Klausner (“Space Cowboys,” “Soul Surfer”) and actor Kevin Sorbo (star of the “Hercules” TV series). Dr. Mark Shevy, an Associate Professor of Mass Communication and Media Production, worked with the grip crew on a film called “The Secret Handshake.”

“Nothing compares to the perspective you get by doing the actual work and living day in and day out as part of the crew,” said Shevy. “I learned new skills, gained insight on the overall process of filmmaking, and made a good number of friends.”

Shevy (pictured on the right) said the film was fairly low-budget, only about $300,000, which allowed a more casual atmosphere than in a film that has 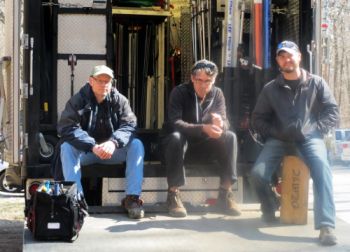 $100 million riding on it. This provided ample opportunities to chat with the cast and crew, which contained notable professionals.

“I was repeatedly surprised by the caliber of people with whom I was working,” said Shevy. “The writer/director worked extensively with Clint Eastwood. The lead actor has been the star of a hit TV series and a growing list of movies, one of which was in theaters this spring. The unit production manager was a coordinator for 2013’s acclaimed film “42.” Many of the crew members are currently working for the TV series “Nashville.”

Shevy said he tried to put himself in the shoes of the students doing internships.

“I worked hard, as though my future job depended upon it, and I guess I still have what it takes,” laughed Shevy. “Several people told me that they hope to work with me again and that they’ll give a great recommendation if I ever want to get a job in the film or television industry.”

The experience confirmed for Shevy that internships and other real-world experiences are vital for many students.

“I told people that our broadcasting majors are required to have internships, and they emphatically said, ‘That’s so important,’” said Shevy. “A good internship allows students to see what the job is really like, teaches details that can’t be taught in a classroom, and develops skills and career networking necessary for getting your foot in the door for a job.”

The film is a joint venture between professionals in the movie industry and a new graduate program in filmmaking at Lipscomb University. The university desired to incorporate a full-scale project with experienced professionals, and the film producers needed extra crew members and resources to augment the film’s budget. The collaboration was a win-win solution, said Shevy.

“We’ve done similar collaborations at NMU, such as involving students in professional television sports and radio broadcasts,” said Shevy. “Since the film shoot, I’ve been thinking about ways we might be able to do even more.”

“The Secret Handshake” is a family comedy about a father who has a daughter being harassed by a trouble-making boy. In an attempt to help the boy develop better character and maturity, the dad takes the boy camping, where they have mishaps, laughs, adventure, and some thoughtful reflection.

“The experience was also personally rewarding, because it is the kind of movie that I want to see with my family,” said Shevy.

Producers for “The Secret Handshake” are pursuing network television and other distribution deals. The film is scheduled to be released this fall.