About Us - NMU Facilities

The site for Northern Michigan University was originally formed as the last glacier retreated into Labrador. The hill that NMU’s campus rests on is part of a beach head formed during the ice age. The area was inhabited by at least six villages of Paleo-Indians following the glacial retreats. Today, the Facilities Department plans structures and development with the intention of preserving the natural beauty of the campus.

View the NMU Campus Map at the link below.

NMU’s physical campus is made up of more than 50 facilities and is located just minutes from the shore of Lake Superior and from downtown Marquette.

View or download the NMU Campus Parking Map at the link below.

The site for Northern Michigan University was originally formed as the last glacier retreated into Labrador. The hill that NMU’s campus rests on is part of a beach head formed during the ice age. The area was inhabited by at least six villages of Paleo-Indians following the glacial retreats.

The area was first explored by William Burt in 1844. When people started settling in the Marquette, several individuals owned land which later became university grounds. John Outhwaite, mayor of Ishpeming in 1851, owned 640 acres. David Nickerson purchased 199 acres in 1852. Three years later, the Sault Canal Company became landowner of most of NMU’s property. In 1859, James Pendill, who later served as mayor of Marquette, purchased 59.25 acres. Finally, in the summer of 1899, the State Board of Education accepted a 20-acre donation by John Longyear and Frederick Ayer on the north side of Marquette, along the street car line, to build Northern State Normal School, following the approval for the school's establishment by the Board a few months earlier.

The original site of Northern was located on a heavily forested hill, known in the past as “College Heights,” overlooking Lake Superior. Longyear, Dwight Waldo and the Board decided to construct the first campus buildings out of Marquette sandstone, following the removal of between three and four feet of the original elevation. Sidewalks were built in 1905 and, in the fall of 1906, F.J. Coryell, landscape gardener from Birmingham, Mich., was engaged to create plans for beautifying the campus.

When construction began on the John D. Pierce School in late 1922, the Pierce school garden and the old tennis courts were destroyed. New macadam tennis courts were constructed on level land north of the buildings and improvements were made to athletic fields.

In the summer of 1933, the North Gate was constructed at the northeast entrance to campus at the corner of Presque Isle and Waldo Streets. The area was landscaped by Hugo Muelle, who planted cedars and shrubs. He also created cinder paths connecting buildings on campus. Further, travel ditches were dug for surface draining and piping was laid to take care of the landscaping water supply.

In the late 1940s, under President Harden, the campus began to move into the woods to the northwest to take on its present shape. Farm land adjacent to Fair and Lincoln Avenues was purchased, as well as the old county fair grounds along Wright Street. Much of the area became the site for residence halls constructed in the 1960s and 1970s. In 1961, James Plesscher of Marquette landscaped the University Center and residence halls.

In 1950, the university officially established a facilities department. It was named the Maintenance Office, which became Maintenance and Operations in 1960. As the university grew, the department became more elaborate. David H. McClintock was made the coordinator of campus development and capital city in 1968. Beginning in the late 1970s, department employees began developing a nursery where plants and trees could be grown for use around the campus.

Today, the Facilities Department plans structures and development with the intention of preserving the natural beauty of the campus. The department is under the direction of vice president for administration. It consists of Engineering and Planning, and Plant Operations. The department's mission is to maintain and upgrade buildings, grounds and equipment with a high level of proficiency, so as to provide the proper environment for the university community. In its effort to meet its mission, the Facilities Department stresses the protection of property and the investment in the continued long-range use of facilities. The major concerns of the department are the attractiveness of the campus, healthful conditions, safety and economy of operation.

Source: A Sense of Time by Russell Magnaghi 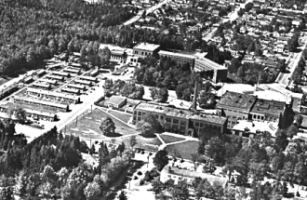 The mission of the Department of Plant Operations involves a commitment to provide the expertise and resources necessary to provide an environment of highest quality while meeting the architectural, custodial, electrical, grounds, and mechanical maintenance and energy needs of the students, faculty and staff. This goal is accomplished by providing capabilities and resources which include the generation of energy for air conditioning and heating, and the ability to keep all facilities operating effectively, efficiently and dependably.