NMU’s dance and athletic training programs are teaming up with Meg Schneider ’02 BS, athletic trainer for the famous Radio City Rockettes and Chicago Bulls Entertainment Team, in unique interventions to reduce injuries in dancers and performers.

In order to come up with the screening methodology, Rochester and her students reviewed screening tools and dance medicine research and received guidance from Schneider, who was in the first graduating class of NMU’s athletic training program.

“We reached out to Meg because we wanted to know what kind of screening tools she uses when she works with her dancers and performers,” said Rochester. “She was able to supply us with some tools she’s adapted in her work. From there, we developed our own tool that measures muscular strength, flexibility and some core stability and balance.”

Schneider said that although there are baseline screens out there, it is important to look at your population and alter the screening to meet their needs.

“The Chicago Bulls Luvabulls and Entertainment Team aren’t in pointe shoes for instance, so I don’t need to check that ankle stability to the same degree as I would if they were dancing en pointe,” said Schneider. “NMU’s dance program includes ballet, so for them that’s a major component.”

Athletic training students—those at Northern included—do not typically have exposure to dancers in clinical rotations. They typically work with athletes involved in sports like football, volleyball and basketball. However, Schneider said that the relationship between athletic training and the entertainment field has grown during the last 15 to 20 years, particularly in large metropolitan areas.

“When performers are exposed to athletic training and dance medicine services—such as this one starting at NMU—they will come to expect those services as they continue into their professional career,” said Schneider. “Education and self care in the early stages of one’s career is also an important tool for performers.”

“Dancers are athletes and they need to be treated as such. I cannot imagine a hockey player coming in and just putting on skates and hitting the ice the first day of practice without any sort of pre-screen having taken place. Dancers deserve the same treatment as other athletes.”

“For us as performers and artists, our bodies are our instruments or we need our bodies in order to use our instruments,” added Grundstrom. “It’s critical to develop an understanding and respect for that during the undergraduate years and really learn best practices that students can carry with them into the professional world.”

“We want to really be able to address the physical needs of visual and performing artists, as well as other types of groups outside of athletics.”

NMU Co-Director of Theatre and Dance

“If we find a group of dancers with poor hamstring flexibility, for instance, we will work with them to implement a program to improve that deficiency. In order to do that, we can bring them into our Injury Evaluation and Care Clinic, and our athletic training students will work to implement an exercise program for them to help protect them from injury down the road. What we are doing does not only benefit the dancers and performers, it also significantly benefits graduate athletic training students, affording them the opportunity to evaluate, treat and provide rehabilitation programs for a very different type of athletic population.”

According to Grundstrom, the most common athletic strains seen in dancers are lower extremity ones, so the screening tools most specifically considered deficiencies surrounding the hip, back and core.

“The ultimate long-term goal is that this will integrate other populations like the marching band, photography and cinematography students and more,” said Grundstrom.

Rochester and her students will also end up with data subsets that can be turned into significant academic studies that could provide presentation and publication opportunities for students.

In reflecting on her own time as a student at Northern, Schneider said that Rochester’s enthusiasm laid the foundation for her own passion for her career. From working such events as the Macy’s Thanksgiving Day parade to being courtside for every Chicago Bulls game, Schneider’s career is nothing short of extraordinary.

“Through working in entertainment, I have gotten to be a part of once-in-a-lifetime events, and for me I get to do them all the time,” said Schneider. “That really is a lot of fun. It’s work, but I come home at the end of the day and think to myself, ’Wow! I was just at the NBA All-Star Grand Slam event.’ What everyone watches on TV I see live in person and work it.”

As an athletic trainer, Schneider helps performers in myriad ways. All areas of athletic training can be used in the performing arts, such as pre-care, management of acute and chronic injuries, conditioning, orthopedic screenings and overall healthcare assessments.

Being someone who has paved the path of her career, Schneider’s advice to NMU students and alumni is to think outside the box. 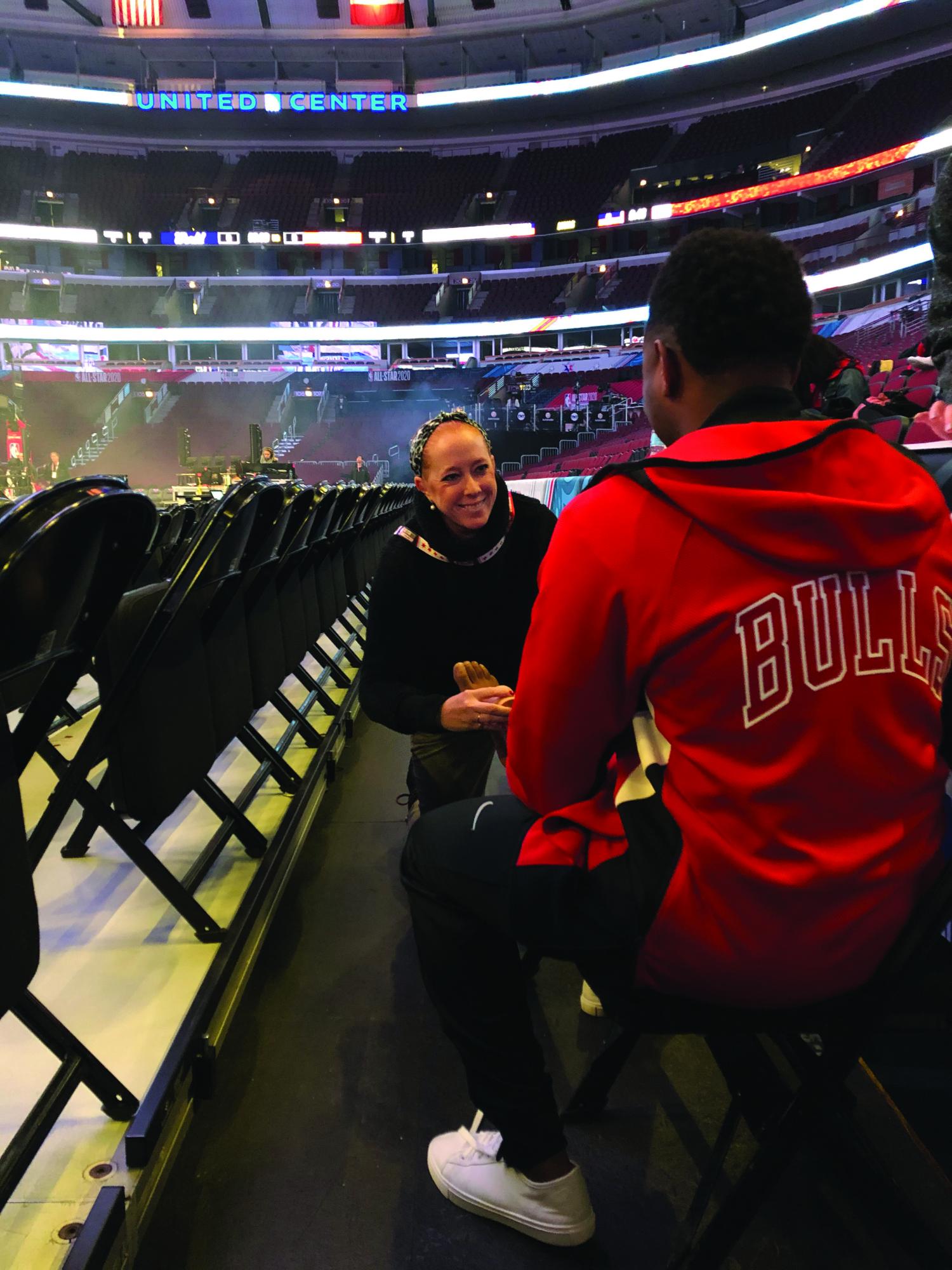 “There are a lot of opportunities that aren’t laid out in front of you,” said Schneider. “In my entire dance medicine career, not one of my jobs in the performing arts was posted via traditional job posting sites. I created my role with the Chicago Bulls, and I interned for my boss during the Radio City Rockettes’ infancy program year and was asked to join immediately after that season. It is important to explore and create opportunities for yourself.

“I absolutely love my career. Injury-wise, there are similarities and differences from a more traditional athletic setting. Things like ankle and hamstring strains still fill my day, but I also get crazy ’entertainment’ injuries, such as sheep bites and drone injuries.”

Another NMU affiliate paving for herself a unique career path is NMU exercise science master’s candidate Emily Klinkman, who is adding to the body of dance research for her thesis project that is similar in scope to the athletic training pre-screens.

“A lower coordination variability means that after 10 trials of the jump, the dancer’s 3D motion in space varied a smaller amount throughout all 10 trials than somebody else’s,” said Klinkman. “Since we’ve seen in research that highly experienced dancers have a lower coordination variability, I hypothesized more injury. The reason for this is that they have to do their movements in a visually appealing way repetitively.”

“I think that Emily’s research is wildly interesting because the body of research involving dance science and dance medicine, while growing, is still quite small,” said Grundstrom.

“There are studies similar in concept to what she is doing that have been done on athletes. However, what she is doing with artistic performers is very different because we dancers have a particular aesthetic that has to be met at all times, which goes beyond simple functional biomechanics.”

“The value of my research is looking at the quality of movement and really dissecting it,” said Klinkman. “We often think of dancers as graceful and ultra-coordinated athletes. But if they are getting injured, then we need to look at it holistically and in ways that we haven’t before. If we look at it from moment to moment in a 3D capture field, we can see key instances and identify trends globally...and adjust movements to avoid injury.”

Klinkman aspires to pursue computational biomechanics, researching with the goal of creating wearable devices to improve the quality of life for people with injuries or musculoskeletal diseases. She also hopes to make movement analysis cheaper and more accessible, such as through the use of GoPros in a wide range of contexts—perhaps on the stages of Broadway, Radio City Musical Hall or on the courts of the NBA.

In photo further above, students Sam Nelson and Megan Hibbard conduct a muscular strength pre-screen for potential injury points in the hip.