Lives on the Line - Northern Magazine

Lives on the Line

Police officers are regularly exposed to critical situations, ranging from motor vehicle accidents and homicides to child abuse and domestic violence. While they are well-trained on responding to and safely controlling a situation when they arrive at a scene, they are typically less prepared to deal with the potential aftermath of the personal trauma it may impose.

The cumulative stress associated with the dangerous and unpredictable nature of their work takes a toll, even for the most resilient and experienced officers. This results in rates of PTSD, burnout, depression, alcohol misuse and other anxiety-related mental health conditions far higher than for the general population, according to the National Alliance on Mental Illness. More officers die by suicide than in the line of duty.

Department of Psychological Science alumna Dr. Kammie Rossetto Juzwin ’82 BS is well-aware of how taxing the profession can be. For the past 12 years, she has been contracted as an embedded psychologist for the police department in Bartlett, Ill., about an hour northwest of Chicago. She provides wellness consultation and support for BPD’s 60 officers and staff. She also serves as a mental health member of regional and national disaster response teams. Her work can include debriefing and support sessions, in a squad car or at the station, with those who respond to critical incident calls.

“I don’t address the response tactics or their decision-making, but talk about their reactions to what happened, and whether they’re experiencing any physical symptoms or stress-related indicators that would indicate it’s bothering them,” Juzwin said. “If you recognize stressors or burnout, you can address it. The problem with traumatic stress is we survive it because we compensate for it. But we never recognize the cost of the compensation until we’re basically empty. And sometimes, not even then.

“These folks go from 0 to 100, off on, off on. They can go from a fatal accident that requires massive extrication and rendering aid to a barking dog call. It’s hard for the mind and body to process that. They might need 10 minutes to work off the stress response and recalibrate. My goal is to keep them at the top of their game psychologically and emotionally for as long as possible to avoid compassion fatigue that can lead to burnout, which can result in increased risk of injury or behavior, relationship and substance abuse issues.”

Juzwin recalled a mass shooting that involved her department and other agencies, but could not provide details because of confidentiality requirements. She stressed the importance of helping to manage exposure to critical incident stress before it builds over the course of multiple events and becomes cumulative trauma that also impacts their personal lives.

Her priority is the mental and physical well-being of BPD personnel, but if Juzwin can help to resolve a case that officers are working on, she occasionally puts her past clinical experience to work interacting with citizens.  She has supported a family during a search for a missing person, talked to suicidal subjects in their homes during calls, and provided calming reassurance to subjects under arrest as officers are processing them. When someone stepped in  front of a truck suddenly on a major highway and was killed, she followed up with the driver, who was not at fault yet experienced wrenching guilt and trauma. He visited with Juzwin several times and told her it was partly because she reminded him of his mom, whom he missed very much.

“It really is an honor to be with officers on the job and support them in any way I can,” Juzwin said. “Most responders have such good intentions and such good hearts, and really believe in service to the community. They don’t want to have to use force or be the enemy of the very citizens they serve. In my department, they tell me they appreciate what I do for them and say I just fit them. We’re like family. We rib each other, but we really care about each other.”

Northern Magazine staff saw evidence of that congeniality as Juzwin led a tour of the department’s state-of-the-art, 49,000-square- foot facility dedicated in 2019. As officers caught sight of her, they said cheerful hellos and shared doses of humor. Most offered unsolicited gratitude for her presence at the station and praise for her performance. Juzwin also paused to pet the BPD’s new comfort dog, Maverick, a gentle giant of a golden retriever with a boxy head and soulful eyes that entice attention.

During an interview in a conference room, Juzwin was asked what expertise, skillset and personality she brings to the job that make her so effective.

“You need to be flexible and adaptable for sure,” she said. “I’m passionately curious about their perspective and how I can be useful in ways they need me to be. Unlike therapy, which is more directive and structured, I’m not in charge of anything with these officers. They determine the timing and direction of our conversations. I also really like them and think what they’re doing is important and difficult.”

Symbolism is clearly important to Juzwin. Her office—a cozy space with comfortable seating, a sound machine and blue-and-white candies in a nod to her police department’s colors—features a photo of a sheep dog because “they guard the flock,” much like Juzwin does. There is also a collage of four mandalas. Three are each depicted in a first responder color: blue for police, red for fire and yellow for telecommunications. The fourth signifies protection from a mass response incident. 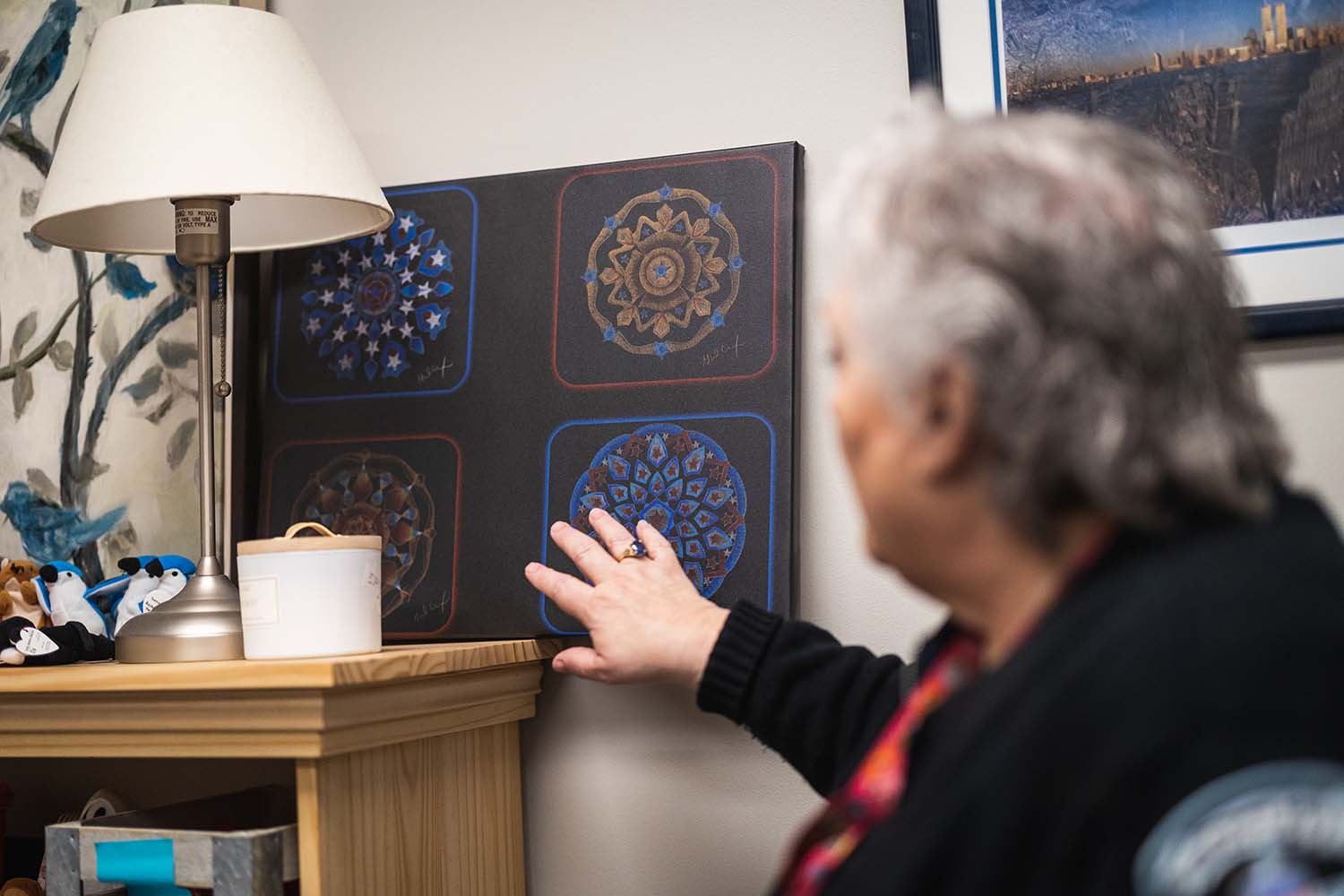 Trauma has been the foundation of Juzwin’s career, but in different contexts. She defines trauma as “outside your normal range,” and emphasizes that getting support is imperative to one’s quality of life. “If you could have already fixed the problem, you would have,” she added.

The Upper Peninsula, where Juzwin spent her formative years while her father was stationed at the former K.I. Sawyer Air Force Base, is also well-represented, with framed photos of the area taken by former high school classmate Bob Fleury and paintings by Kathleen Conover, both of Marquette. The images adorn her office and the “soft room” down the hall set up as a refuge for crime victims or family members of those being questioned, with toys and Beanie Babies to put children at ease. One room at the station also features a wall of police badges from other departments nationwide that the BPD has collected.

While incorporating mental health into law enforcement is relatively new, Juzwin said it evolved through the efforts of the Society for Police and Criminal Psychology. The SPCP was founded by a group of psychologists, including former NMU professors and spouses Mike Stoloff and Joanne Brewster. Juzwin met the couple at an SPCP conference 25 years after working in Stoloff’s lab at Northern. Another NMU mentor was Aaron Roy, who took students to international conferences where he moderated sessions.

“By the time I completed my bachelor’s, I had not only attended conferences, but also had poster presentations and publications to my credit. Pryse [Duerfeldt, former department head,] said I would have a vita of impressive activities by the time I left and said, ‘Don’t ever forget to put them in there.’” Now her vita includes teaching, research, consultation, writing and clinical experiences. Trauma has been the foundation of Juzwin’s career, but in different contexts. She defines trauma as “outside your normal range,” and emphasizes that getting support is imperative to one’s quality of life. “If you could have already fixed the problem, you would have,” she added.

As a former hospital clinician, Juzwin dealt with abuse survivors, highly suicidal individuals and patients dealing with self-injury, substance abuse and eating disorders. That work spawned her interest in helping hospital personnel cope with trauma, which led her to discover the Northern Illinois Critical Incident Stress Management (NICISM) team that she joined right after 9/11.

NICISM is an all-volunteer nonprofit composed of emergency services and mental health professionals dedicated to providing immediate comprehensive crisis response interventions and pre-incident stress management education for emergency service personnel throughout the Chicagoland area. Its services are free of charge and confidential.

As volunteer coordinator for NICISM, Juzwin has taken calls requesting services and debriefings. She has coordinated responses for mass shootings, national disasters, line-of-duty injuries or deaths, and crimes. It was there that she worked with a detective who later became Bartlett’s police chief, and picked Juzwin to serve as the embedded psychologist.

On top of her professional roles, she also was employed as chief psychologist for COPS & FIRE Personnel Testing Services, based in Schaumburg, Ill. For more than two decades, she conducted pre-employment and promotion psychological evaluations for law enforcement, firefighters, EMS and emergency telecommunications personnel. During the COVID-19 pandemic in 2020, Juzwin participated in two deployments—to the Quarantine Mission and the New York City Morgue Mission—through the National Disaster Medical Services/Disaster Mortuary Victim Information Center.

Because police witness and experience multiple stress-related incidents, their brains and bodies receive little reprieve from the heightened biological responses required to handle dangerous and threatening situations. This can lead to cumulative post-traumatic stress injury, which can become PTSD, along with other adverse impacts. Many officers simply do not recognize when they are experiencing a stress-related physical and mental health issue. Even if they do, they might be reluctant to seek help because of the stigma, concerns about confidentiality and appearing unfit for duty, or a belief that mental health professionals cannot relate to those working in law enforcement.

Juzwin has eagerly accepted the challenge of convincing many of the police and first responder officers she has worked with that their mental health warrants serious attention so that they can continue to perform at a high level for their own well-being, as well as the safety of their colleagues and the communities they serve. It is obvious from her passion and positivity, along with the rapport she has with the officers in her flock that she compassionately guards and supports, that Juzwin loves what she does. She calls it “the best job in the world.” 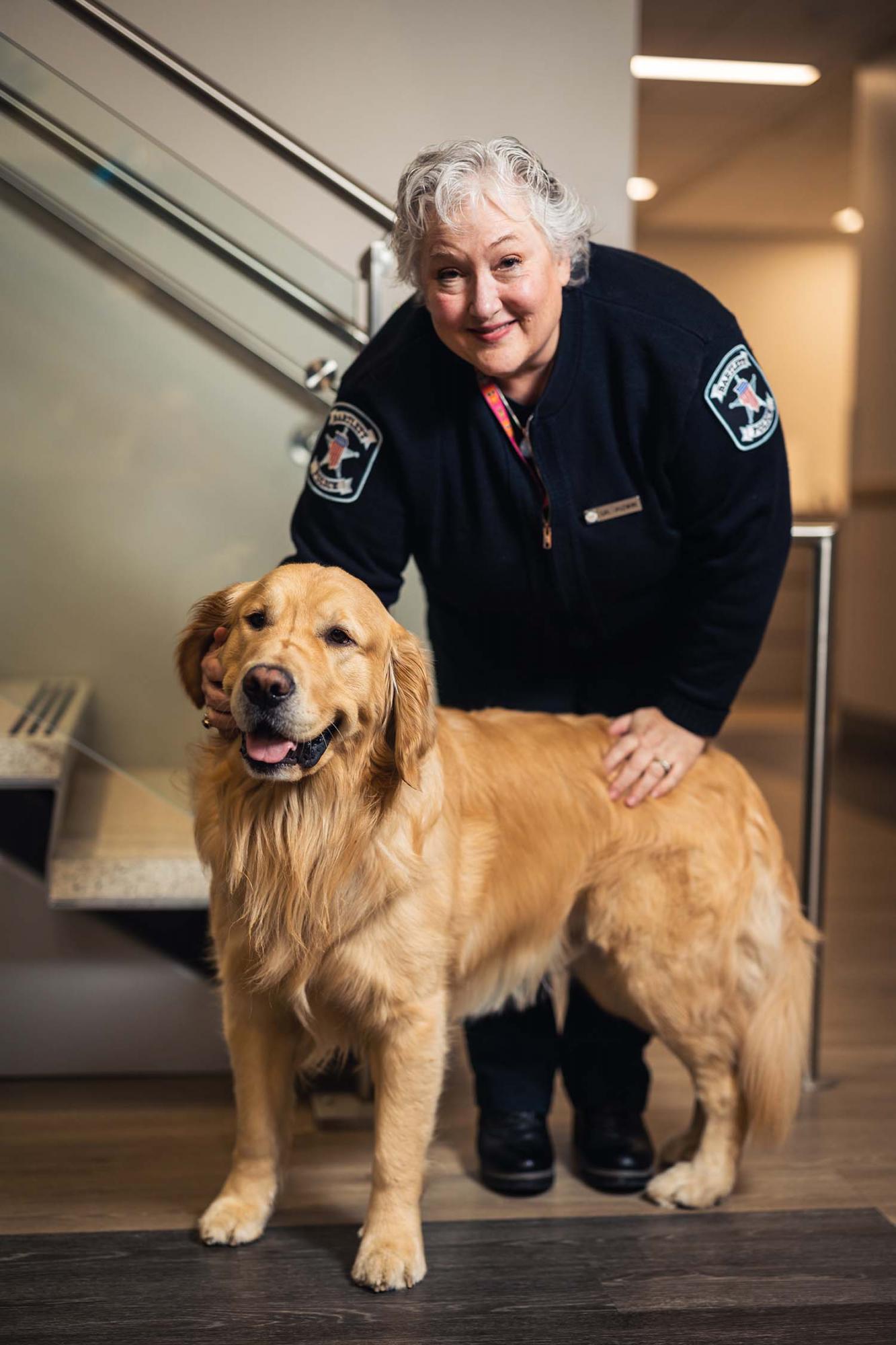