The Wildcat and the Sea

The Wildcat and the Sea

Dr. Ray Timm charts a course for cleaning up the largest plastic accumulation in the Pacific.

Many innovative ideas stem from the goal of either solving an established problem or reducing its adverse impacts. Entrepreneur Dr. Ray Timm’s ’92 BS motivation extended beyond that to something more personal: appeasing his then-10-year-old daughter, Maddie. She was visibly upset one night as she showed him a picture of a sea lion that had become entangled in a fishing net and drowned.

Knowing that her Dad had devoted his entire career to combatting ecosystem devastation—at the time he was working to restore imperiled salmon stocks and their habitats near Seattle—Maddie justifiably asked him why no one was doing anything to clean up the floating debris.

Abandoned or discarded fishing nets, lines and ropes, commonly known as ghost gear, represent the bulk of large plastic pollution in the oceans and pose the greatest threat to marine life, according to the World Wildlife Fund. In addition, a National Geographic story last year stated the amount of plastic trash that flows annually from rivers into the oceans is expected to nearly triple by 2040 to 29 million metric tons. Perhaps even more distressing is a prediction by the World Economic Forum and Ellen MacArthur Foundation that plastics could outweigh fish in the sea by 2050. Various modes of plastic refuse generation have combined to create what Timm calls a “conservation emergency.”

Mainstream media coverage of the issue began to increase noticeably around the same time that Timm’s daughter implored him to take action, he said. It has featured some disturbing imagery to punctuate the problem: a dead albatross with its stomach intentionally cut open to reveal contents composed primarily of plastics; a sea turtle with a straw in its nose; and a mother bird unintentionally feeding plastic to her chicks. 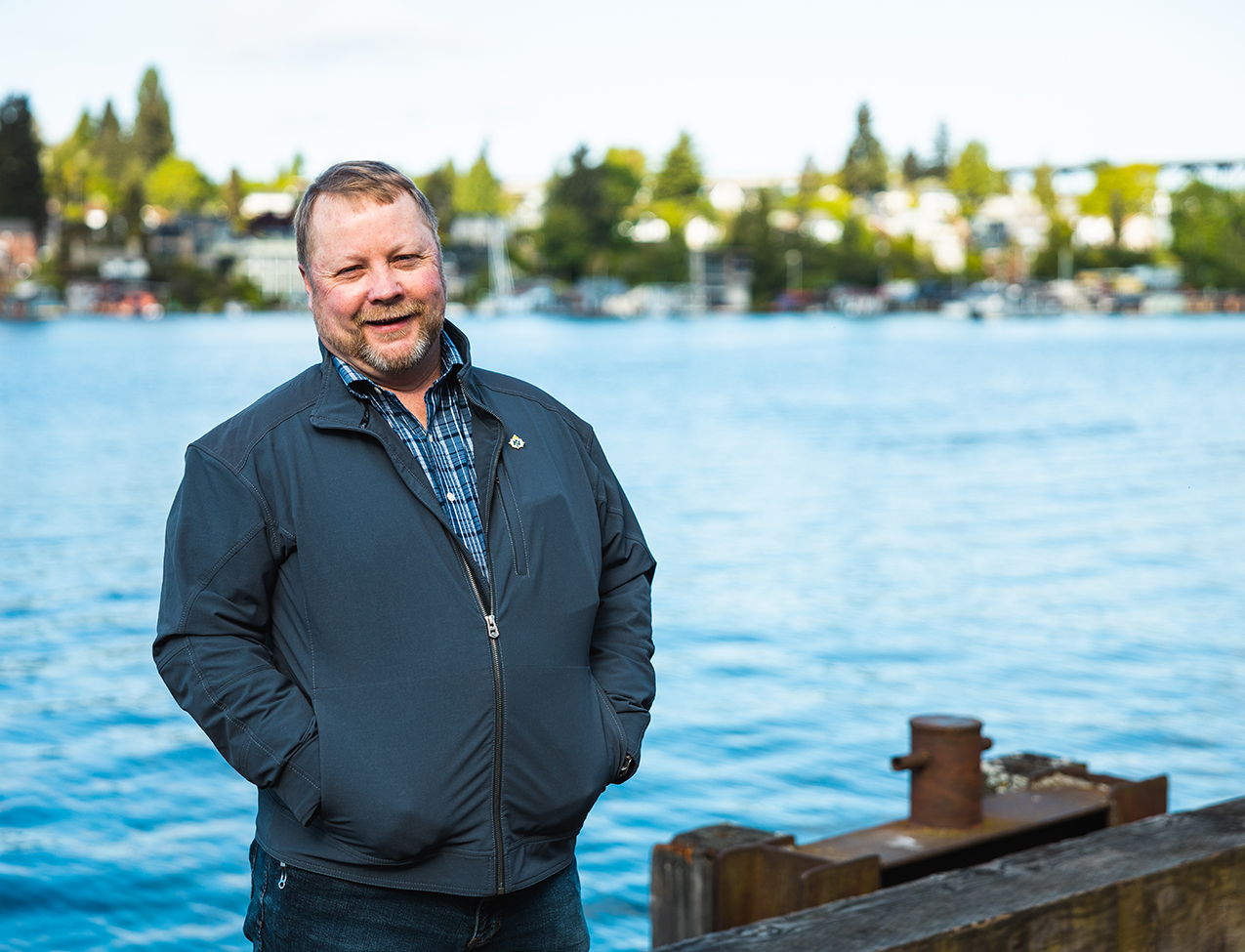 “It hit me that we should be able to apply what we know to this type of problem, but there were challenges we had to address first,” Timm said. “Existing attempts to clean up debris in the oceans is dependent on recycling, but there is no meaningful plastic recycling technology for more than 90% of plastics. A few types are made into deck boards and other products, but it’s a pretty narrow market. Also, it’s too expensive to drive an empty ship anywhere, even from Tacoma to Seattle. Deadheading to the middle of the ocean to pick up garbage, only to bring it back to a landfill, doesn’t make much sense. So if those are the biggest barriers, how do you circumvent them?”

In response to that question, Timm tapped his past experience as a government scientist, university researcher and consultant to establish Seattle-based Siskowet Enterprises. The name is derived from the siscowet trout that inhabits deep-water regions of Lake Superior. Legend has it that early commercial fishers discovered these trout had such an abundance of energy stores—lipids required for overwinter survival and successful reproduction—that when tossed into a boiler, they burned hot as coal and could run the fishing boat.

Whether fact or fiction, the story inspired Timm and business partner Dan Gestwick to develop an idea for a self-sustaining process to remove plastics from the world’s oceans. Their plan requires no new inventions; it creatively integrates existing technologies. It is in the prototype stage now, but when fully deployed, a fleet of battery-operated autonomous aquatic vessels will sweep up plastic and bring it back to a “mother ship,” where the plastic will be converted to electricity through high-efficiency, waste-to-energy incineration.

“I don’t want to decry all plastics as evil,” Timm said. “Our houses, offices and cars are full of them and we’ve all benefited from them to some degree. But their extreme durability makes them troublesome polluters. One characteristic that makes plastics useful in the Siskowet model is that they’re made from polymerized oil, so there’s a ton of energy in them. The density varies among different types, but generally it’s consistent with the amount of energy locked up in diesel fuel. We can exploit that and use it to fuel the cleanup. I figured out that it would take 485 water bottles to achieve the energy equivalent of a gallon of diesel.”

Siskowet will focus its efforts on part of the Great Pacific Garbage Patch, also known as the Pacific trash vortex. Such gyres are created by plastic debris exported from nearly all major rivers, but the Great Pacific Garbage Patch represents the largest accumulation of ocean plastic in the world. It spans waters from the West Coast of North America to Japan. Timm said it has been estimated at twice the size of Texas. 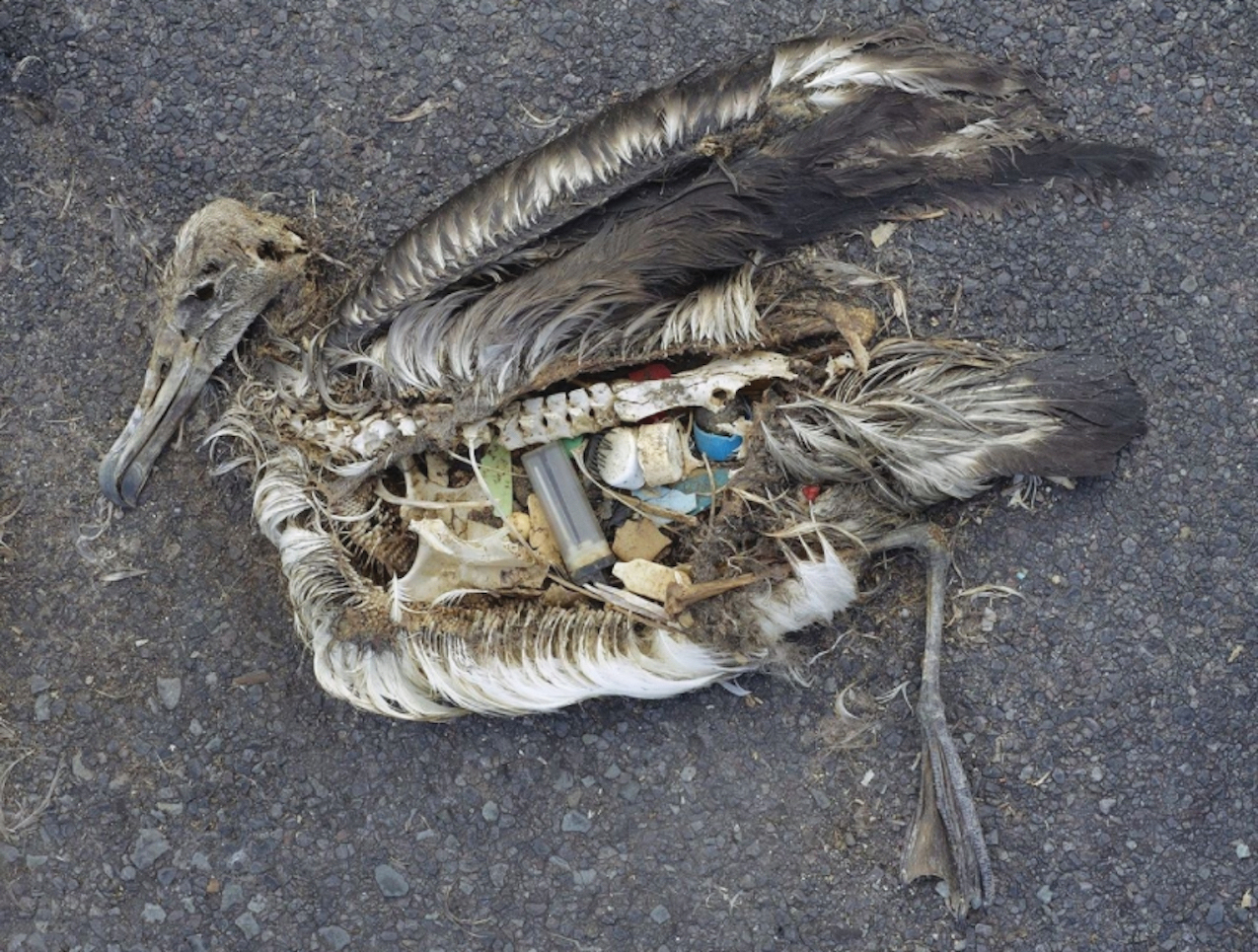 Sweeping a sizeable swath of ocean is an incredibly daunting challenge. The first step is finding patches where pieces of plastic have collected. Timm said not every satellite has the correct sensors to detect them or the spatial resolution capability to make it a useful tool. In the time between a satellite passing overhead and cleanup vessels being deployed, the ocean currents can move the patch and perhaps change its shape or density.

Siskowet will focus its efforts on part of the Great Pacific Garbage Patch. It spans waters from the West Coast of North America to Japan. Timm said it has been estimated at twice the size of Texas.

Some plastics barely float because of their density in relation to seawater, Timm said, making it easy for storms to drive them down below the surface, where they are no longer visible from space. Siskowet will rely on sophisticated National Oceanic and Atmospheric Administration (NOAA) models to estimate where it will be in a certain number of days after the satellite images are collected.

“The footprint you’re cleaning changes continuously,” Timm added. “You need to scale the shift so you can be more precise in space and time. We’ll do that by launching airborne drones equipped with green lidar. It’s like radar, but instead of sound, it uses light for detection and ranging. It penetrates below the water’s surface and reflects off whatever is down there.”

Based on the time it takes for the light to travel through the water and be reflected back up to the drone, Timm said they can measure the plastic pieces and determine their precise coordinates in three dimensions. The information supplied by the airborne drones will be used to create new waypoints for the deployment of water-based autonomous cleanup vessels (ACVs). When the ACVs are within a few meters of the location, they will turn on stereo, bow-mounted cameras to precisely locate the plastic and place the cleanup apparatus directly on it.

Water will drain from the pieces of trash as they catch a ride on a conveyor into the hold. When the ACVs achieve their maximum capacity, they return to the mother ship to empty their payloads and receive a fully charged battery pack before they are deployed again. ACVs would be programmed to swarm around each other to maximize efficiency in collecting debris. 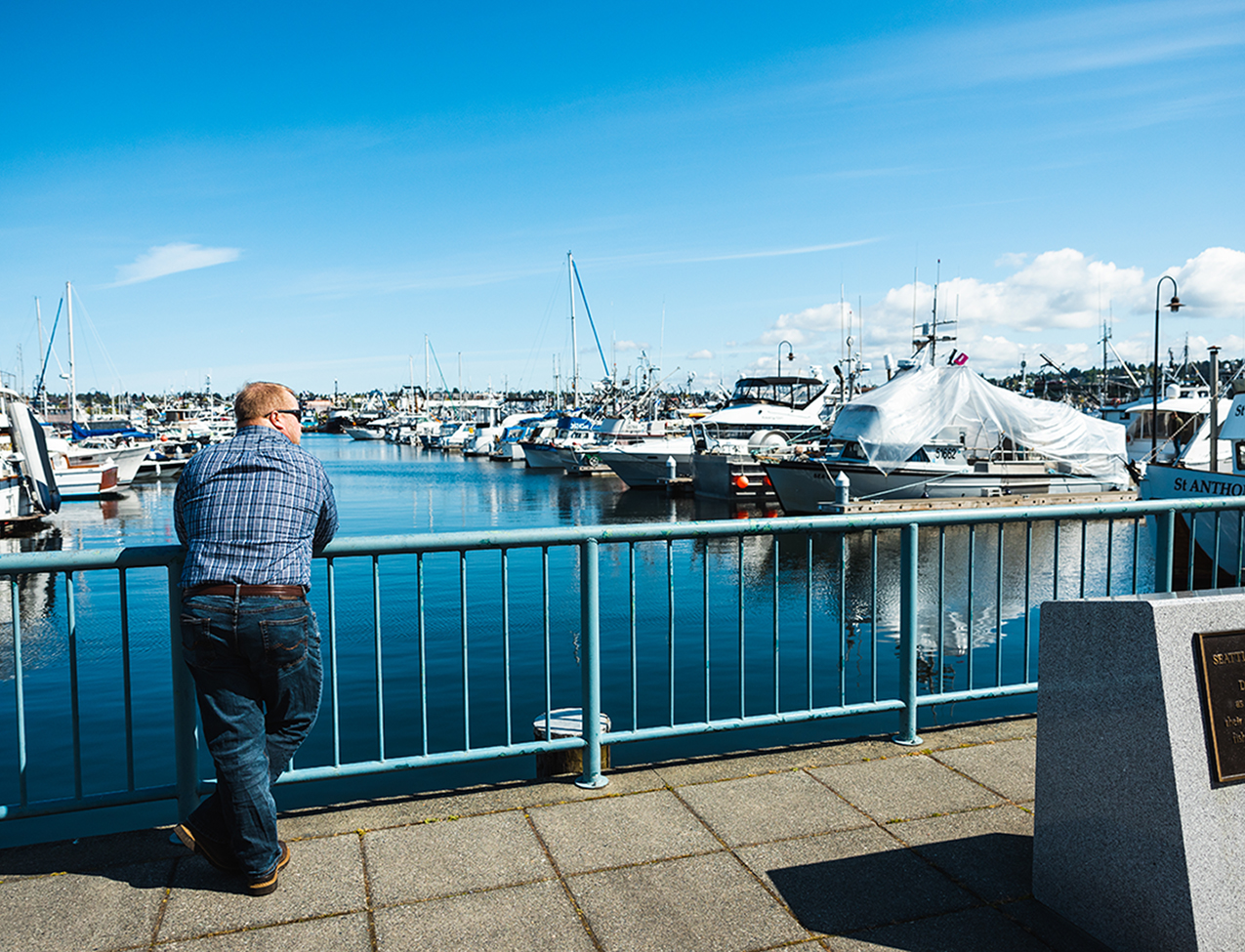 On the mother ship, Siskowet will put the plastics into a high-temp, high-pressure environment devoid of oxygen and break apart their molecules at the elemental level, leaving behind synthesis gases—primarily hydrogen and carbon monoxide. The hydrogen will be used in fuel cells to generate enough electricity to run the entire operation. While that system is still in development, Timm said the idea of integrating environmental restoration and technology was borne at Northern, where he was a biology major and chemistry minor.

“Professor John Rebers had a profound impact on me. I had not been exposed to the marriage between technology and biology before his class. He integrated a computer program that we used on Macs with 9-inch screens. It used a new interface for understanding cellular and molecular biological processes. NMU didn’t even have email for students at that time; everyone walked around with floppy discs. But John joined two different worlds in a way that really informed my academic and professional trajectory.”

Timm said the urgent pollution problem requires a sophisticated solution. The most promising technologies for cleaning up macroplastics from the ocean are autonomous harvest vessels to retrieve them and high-efficiency gasification to convert the material to both thermal and stored electrical energy.

“If there isn’t any formalized way to get rid of garbage, especially the types that don’t break down, ‘out of sight, out of mind’ seems to be the paradigm that is globally adopted. If we could get the UN, for example, to prioritize the problem through a cleanup fund, that might be a vehicle whereby it becomes an economically viable line of business, not only for us, but for others.”

Timm said another option might be a “cradle to grave” responsibility model for plastics manufacturers. He said similar policies have been implemented in parts of Scandinavia, where automakers are obligated to recycle the cars they produce after consumers are done driving them.

In the meantime, Siskowet Enterprises is moving forward with plans to address the growing problem of ocean plastics using methods inspired by historical legend, natural processes and modern technology. The company’s website states, “We’ll know our success when the plastic is gone.”

Regardless of whether Timm’s enterprise fully achieves that ambitious goal, he has already demonstrated to his daughter that her concerns were justified and that he took them to heart. He willingly revamped his career in order to develop a method for sweeping the sea of potential threats to marine life—both for Maddie’s peace of mind and the health of the environment.