Faculty and Staff - Sociology And Anthropology

Malorie Albee is a bioarchaeologist who is interested in questions about the interactions between
biology and culture, and how those interactions shape modern human variation. She holds a PhD in
Anthropology from The Ohio State University, an MSc in Bioarchaeology (Human Osteology) from the University of Exeter, and a BS in Archaeology from the University of Indianapolis. Her research interests include bioarchaeology, human osteology, paleopathology, and modern human variation, especially of the foot. In the past, she has studied the effects of tarsal coalition, a congenital condition affecting the foot, on the lower body in a Medieval British skeletal population. She has also used the spatial distribution of this condition in the cemetery to understand relatedness among individuals. Currently, her research focuses on the effects of cultural pressures on the morphology and health of the modern human foot skeleton in the William M. Bass Donated Skeletal Collection.

Current Courses Taught at NMU
SO101: Introduction to Sociology
SO113: Social Problems
SO308: Research Methods in Social Sciences II
SO495: Sociology of Education
SO 498: Directed Study

Teaching Philosophy:
For me, the task of the teaching profession is NOT as much about teaching a subject as an expert, as it is about enabling learning. It is NOT as much about passing on knowledge and the “right” set of morals as it is about fostering critical thinking and empathy. Therefore, my goal as an educator is to provide students with the theoretical, conceptual, and analytical tools to investigate the social world. In this process, students discover their own truths about themselves and the world around them.

“Good teaching comes from the identity and integrity of the teacher.”

I am interested in how different ethnic groups have used the Great Lakes throughout prehistory and into the mid 19th century. To fully understand the opportunities available along these inland coasts I also study all aspects of the natural environment and cultural landscape to learn how humans have adapted to this dynamic landscape.

Prior to coming to NMU I worked for eight years at The Field Museum in Chicago where I was the Head of Collections for the Department of Anthropology. This position afforded me the opportunity to study firsthand the intricate details of material culture of ethnic groups from around the globe. I also had the opportunity to meet with indigenous representatives that were seeking to repatriate objects or remains, and to be trained in the use of analytical equipment such as an X-ray fluorescence (XRF) elemental analyzer. During this period I also taught courses in archaeology and co-directed archaeology field schools for DePaul University.

Some of the archaeological sites I have worked on or with include:

2015 Presented co-authored paper at the Society for American Archaeology conference in April; The Goose Lake Outlet #3 Site - A Proto-historic site in the Western Great Lakes Region.

“Seneca Decolonization and the “State” of Salamanca: The Changing Relationship between a Native Nation, a Congressional Village, and New York State.” Paper presented at the 117th Annual Meeting of the American Anthropological Association, San Jose, C.A., November 18th, 2018.

“Collaborative Course Design between SUNY and the Seneca Nation of Indians.” Paper presented at the 77th Annual Meeting of the Society for Applied Anthropology, Santa Fe, NM, April 1st, 2017.

“Displacing Seneca to Protect Pittsburgh: Seneca Voices 50 Years after the Construction of the Kinzua Dam.” Paper Presented at the 75th Annual Meeting of the Society for Applied Anthropology, Pittsburgh, PA, March 27th, 2015.

“Haudenosaunee Land Rights in an Era of Judicial Termination.” Paper presented at the 74th Annual Meeting of the Society for Applied Anthropology, Albuquerque, NM, March 21st, 2014.

Heather E. Mooney (she/her/hers) is a critical criminologist and applied sociologist studying the
extension of the carceral state with people’s experiences in the troubled teen industry. Her
research findings are published in Critical Criminology and The Conversation. Forthcoming
publications focus on gender inequality in the troubled teen industry and the ethics of teen
transporting services. Dr. Mooney served on the Outdoor Behavioral Healthcare Council
(OBHC) and National Association of Therapeutic Schools and Programs (NATSAP) Transport
Task Force (TTF) from 2020-2022. The TTF focused on the ethics and problematic practice of
involuntary youth transporting services. She received her BA from Eastern Michigan University
with high honors in Sociology and a minor in Philosophy, and her MA and PhD from Wayne
State University in Sociology, specializing in qualitative research and inequality. Outside of the
academy, she can be found exploring the great outdoors.

I joined the NMU department of sociology & anthropology Fall, 2018. I teach introductory and upper-level courses on food, social inequality, environment, theory, and social change. I am the director of the Food, Environment, and Society (FES) minor program at NMU. My research examines political-economic drivers of and societal responses to global climate change. My book (co-authored with Andony Melathopoulos), Freedom in the Anthropocene: Twentieth-Century Helplessness in the Face of Climate Change, was published by Palgrave Macmillan in 2015 (reviewed in Contemporary Sociology). My research has been published in a wide array of academic journals, including Critical Sociology, Current Perspectives in Social Theory, Ecological Economics, Capitalism, Nature, Socialism, The Journal of World-Systems Research, Social Forces, and Logos, among others. I am currently completing a book manuscript on climate change, critical theory, and (U.S.) American society.

SO101: Introduction to Sociology

SO120: Introduction to Food Studies

SO322: Social Class, Power, and Mobility

In all my courses, my approach to teaching is rooted in the conviction that every student will benefit from learning to think sociologically, and that this thinking emerges through active engagement with curriculum material as opposed to static memorization of sociological facts and concepts. By using multiple teaching techniques and exploring specific topics and issues, students participate in learning the fundamental dimensions of sociology as a discipline: theory, power, ideology, inequality, socialization, and group dynamics at both the micro and macro level of analysis.

Stoner, A. M. (Forthcoming). Marx, Critical Theory, and the Treadmill of Production of Value: Why Environmental Sociology Needs a Critique of Capital. Current Perspectives in Social Theory, Vol. 37.

Stoner, A. M. (2021) “Things are Getting Worse on Our Way to Catastrophe: Neoliberal Environmentalism, Repressive Desublimation, and the Autonomous Ecoconsumer” Critical Sociology 47(3): 491-506

Other courses taught include:

Selected Publications
Professional conferences: Since 1993, delivered over a dozen research papers. Majority of these papers were presented at annual meetings of ASA (American Sociological Association), others of PCA/ACA, MWSA, NCSA, BSA, and NACSA, including numerous guest/invited presentations on diverse topics in the local community.

*Publications in professional journals include Sociological Spectrum, Race and Society, Journal of Ethnic and Cultural Diversity in Social Work, International Journal of Sociology of the Family, and Gender and Society.

My Blog with Poems and Articles

The Sociology and Anthropology Department has need for adjunct faculty from time to time and we are interested in identifying potential instructors for anthropology and sociology.

For anthropology or sociology courses, please send vita to:

Send an e-mail attachment to sosw@nmu.edu.

The minimum academic requirement to teach anthropology or sociology courses is a master’s degree in the relevant discipline. Previous teaching experience at the university level is preferred. Applicants must be current in the discipline in which they wish to teach. 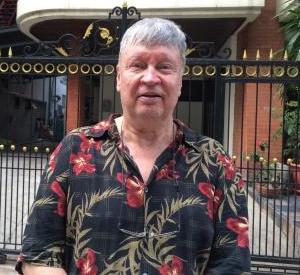 My research has focused on ethnic and occupational traditions in Michigan’s Upper Peninsula. Some of this has resulted in published book chapters and articles on Finnish Americans. Most of my research has been expressed in documentary films: two on Finnish American cultural history and traditions; one on traditional wilderness workers (trappers, loggers and commercial fishers), one on Native American fiddlers, six about the Lac Vieux Desert Ojibwa Band in Watersmeet, MI; and four sociological intervention documentaries on alternative school kids, adults with disabilities, vehicular homicide victims and myths about alcohol and intimate partner violence.  See the Up North Films website at www.upnorthfilms.com .

Teaching Philosophy (and/or) Profile
My career spans over thirty-five years of teaching and making sociological documentary films. Gradually I have evolved into cultural sociologist employing a blend of historical and anthropological perspectives along with sociology.

I try to cultivate the ability to actually think sociologically about your personal life, your social network, community, nation and world.

Grants
I have been awarded numerous grants from local, state and national agencies to produce and direct documentary films. Funding agencies have included state humanities councils (MI, MN, ND, WI), the National Endowment for the Arts, National Endowment for the Humanities and many grants from the Michigan Council for the Arts. Awarded a Fulbright Fellowship to teach and study in Finland in 1982. Delivered numerous papers at academic conferences. Film screenings at major academic conferences and film festivals nationally on PBS and Finnish television networks Films have won both academic and artistic honors. Recently received the Artist of the Year Award (Marquette Arts Council) and Outstanding Scholarship Award (Northern Michigan University).

These elemental statements reflect the aspirations and the actions that compel me.  Together they define my pathway to effective teaching, to creative scholarship, and to responsible citizenship.

I grew up in Grand Rapids where I attended school and explored the natural wonders of Michigan.  After I earned my Ph. D. in Sociology from Western Michigan University, I taught for many years in Ohio.  Now I have returned to my native state to continue doing that which I most value – teach a new generation of students, work collaboratively with colleagues, and seek solutions to the myriad problems that confront our society.

As an educator and Sociologist I focus on problems of violence and injustice.  I have published books and articles on rape, child abuse, youth suicide, domestic violence, bullying, gambling, and violence in schools.  I am especially concerned with helping victims of violence heal, and supporting schools and community organizations in preventing violence.

In addition to my research interests, I have a passion for photography.  I am thrilled by the challenge of capturing an unguarded moment that reveals a deeper essence.  Kaleidoscopic patterns of light, shape-shifting landscapes, and the complexities of the human condition offer endless photographic possibilities.

I feel fortunate to be in a department whose members are engaged in promoting the well-being of students and the larger community.  Come by and visit – we can learn from one another.