Professor Hanson served eight years in counter-intelligence and criminal investigations with the U.S. Army prior to entering academia. Since coming to Northern Michigan University in 1976, he has directed the Regional Police Academy, created the American Legion Cadet Officer Program and served as a trainer for law enforcement and correctional officers. Currently he is serving as the coordinator of Northern's new Loss Prevention Management program. Professor Hanson has a B.S. in psychology and economics from University of Wisconsin at LaCrosse, and an M.A., M.S. in executive development for public service from Ball State University. In addition to teaching in the masters' program, he teaches subjects such as judicial function, investigating, interviewing and interrogation.

What do Southwest Airlines, the Bilbao Museum, and a Farwell to Arms have in common with Northern Michigan University? You may be surprised.

It has been said that many of the greatest ideas have their humble beginnings on the back of a cocktail napkin: the business plan for Southwest Airlines, the design for the Bilbao Museum, the first sentence of A Farewell to Arms, and the initial idea behind NMU’s loss prevention management program. The reality is that this program is the brainchild of Professor Robert Hanson and Dan Faketty. Professor Hanson first began looking into the concept of creating a loss prevention management program when former students began returning to NMU to recruit soon-to-be-graduates from the Criminal Justice department; at the time, they were looking for traditional students to follow traditional career paths.

Through further discussions with leaders in the industry, it soon became apparent that there was a significant percentage of the workforce that was professionally competent yet simply did not have the credentials to continue moving forward in their careers. According to Gus Downing (2006), the CEO to a leading provider of retail loss prevention staffing solutions, Downing & Downing, Inc., only 20% of people in the industry have earned a baccalaureate degree (p.60). When it comes to this type of professional stagnation, the primary issue is the inability to attend school to gain the necessary credentials while continuing to work full-time. As Professor Hanson made trips into the field, managers who were making advances within a variety of retail environments consistently mentioned a desire to have taken courses relating to loss prevention. Professor Hanson quickly recognized this as an opportunity for NMU to get involved and make a difference. At the time, there were concerns about the logistics in executing such an idea, but fortunately technology has since made a leap forward. Professor Hanson contributes the progression of the program from a practical standpoint to the advent of a more economical personal computer along with the widespread accessibility of broadband Internet in conjunction with the improvement of software options. He maintains that the combination of these three tools has turned the possibility of a virtual education program into a reality.

Surprisingly, Professor Hanson admits that he never expected to become the coordinator of the loss prevention management program at Northern Michigan University. Dr. Lang, then department head of the Criminal Justice Department, devised a proposal for the bachelor program, and presented it to NMU’s academic governing board for approval. At that time, it was assumed that the department would hire a faculty person who would oversee the program. When NMU ran into some difficulty locating an appropriate candidate for the position, it was suggested by other members of the department that his inner knowledge of the program and excellent rapport with all those involved would make him an ideal candidate. Professor Hanson has seen this as the perfect opportunity for him to learn new things, gain additional professional expertise, and improve his teaching skills.

Diplomacy is without doubt one of Bob Hanson’s virtues. When asked about how he managed to get the program off the ground, Hanson is quick to remind others that he is not a one-man show: the success of this program is at the hands of many, rather than the fingertips of one. Two key individuals who have been involved with the progression of the program since its inception would be: Grant Patient, the department’s graduate student and the loss prevention manager of ShopKo in Marquette, along with Ms. Sue Young, the department’s secretary. These two individuals have worked behind the scenes to encourage student admission to NMU as well as enrollment in coursework. Two organizations which have provided tremendous support to the creation of the program as well as the professional development of individuals involved in loss prevention are the National Retail Federation (NRF) along with the Retail Industry Leaders Association (RILA). The NRF is the largest professional association in the United States which overseeing all aspects of the retail industry, their Loss Prevention conference alone has over 2500 attendees each year. RILA’s membership consists of persons who are seeking an organization that actively promotes educational opportunities while promoting the development of public policy in relation to the retail industry.

What makes NMU’s loss prevention management program unique is more than the fact that there is no other program like it in the world: it is indeed the only LP program that can be earned completely online, but it is also the only program whose Advisory Board Council is made up of representatives from unparalleled corporations throughout the country (CVS, GameStop, The Gap, Kmart, Limited Brands, Lowes, Neiman Marcus, Sears, ShopKo, Target, Walgreens and Winn-Dixie). Following a Chicago meeting convened by now Acting Dean of Professional Studies, Dr. Paul Lang, the National Advisory Board sought to identify the essential skills that the ideal loss prevention manager should possess. Dr. Linda Zupan, who has since retired from NMU, spent time in collaboration with loss prevention specialists who are working in the field to design the courses which now serve as the foundation for the program. This close partnership between working professionals and academics has been essential to the creation of a program which provides its graduates with the appropriate combination of skills to succeed in the world of loss prevention management. It is just another aspect that makes it so distinctive from others.

What does the future hold for Northern Michigan University’s loss prevention management program and its graduates? Of course, as technologies advance and the focus of the industry changes the program will adapt to meet the needs of the students and their employers. Professor Hanson foresees the development of a course in Safety as well as course in Logistics of Supply Chains and Distribution Centers and there may even be a Master program track on the horizon.

In March of 2010, NMU Criminal Justice Professors Robert Hanson and Greg Warchol traveled to Kenya to meet with officials and students at Chuka University College. The academic institution is located in the central highlands of Kenya in the small market town of Chuka between Mount Kenya and the larger town of Embu. The college, which is associated with the University of Kenya, offers an array of degree and diploma programs. It is a small but very scenic and expanding campus with classrooms, residence hall, and administration buildings. 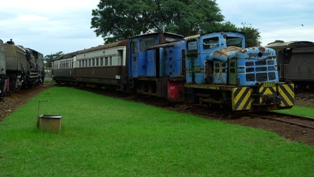 Professors Hanson and Warchol conducted meetings with the college principal (equivalent to a university president in the USA), the provost, and several faculty members. Items discussed were memorandums of agreements between Chuka and NMU, faculty and student exchanges, and the possibility of joint research projects. The professors were also gave a long presentation to a large group of students and faculty on the nature of the US Constitution and the criminal justice system. These topics were of great interest since Kenya is in the process of drafting a new constitution. The question and answer session following the presentation was outstanding with Chuka students asking numerous interesting questions. In attendance at the presentation was a female cousin of US President Obama who asked several question about American politics. 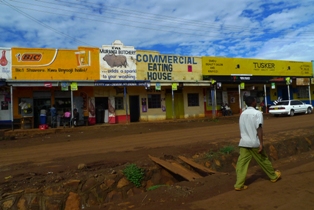 Professors Warchol and Hanson also spent a few days in Nairobi, the very busy and crowded capital of Kenya and visited Amboseli National Park in the far south bordering Tanzania. This was of special interest to Dr. Warchol given his research on wildlife law.

The trip revealed that there were many opportunities for study and exchange in Kenya where the demand for higher education is very great. The number of prospective students greatly exceeds the limited number of universities. It is hoped that NMU will pursue this opportunity for both our students and Kenyan students.