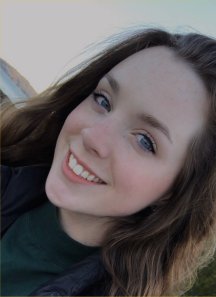 Ms. Haley Teske is the NMU Physics Department’s Outstanding Graduating Student for 2022. Haley came to NMU in the fall of 2018 majoring in physics with a strong interest in mathematics and chemistry. She has always made her education a priority starting with dual enrollment opportunities while in high school. This dedication, and transfer credits, allowed her to explore her interests and potential at NMU and complete several programs. Haley completed her degree in May 2022 with majors in physics and mathematics and a concentration in actuarial sciences. Just to round out her graduation, she completed a minor in chemistry. Along the way, Haley was a student athlete for about 2 years and completed on the NMU track and field. Haley always had a smile and good attitude in the classroom even during the toughest times. She brought confidence and knowledge to the classroom. It is with enthusiasm that the Faculty of the NMU Physics Department award Ms. Haley Teske with the 2022 Outstanding Graduating Student award.

Mariah Goeks (Lake Forest, IL; 05/2021; B.Sc. Physics, Mathematics, French) has worked with the NMU solid-state physics research group since being a Freshman Fellow (08/2017) including working at a national laboratory in England (Rutherford Appleton Laboratory). Her foci have been understanding the behavior of hydrogen impurities in semiconductors and contributing to developing an experimental technique to study these systems. By the time she graduated, she had co-authored two publications in high-impact journals and presented a variety of her work at conferences including the International Conference on Defects in Semiconductors (07/2019). Goeks is now a graduate student at Simon Fraser University (BC, Canada) working towards a Ph.D. in physics. Her research now focuses on using Muon Spin Rotation Relaxation and Resonance techniques to study local magnetic and electronic properties of quantum materials; mainly focusing on unconventional superconductivity and other novel quantum states.

Here, Mariah Goeks is installing a radiation shield over the sample mounted at the end of the closed-cycle refrigerator arm prior to being inserted in the EMU spectrometer on a surface muon channel at the Muon and Neutron Source at Rutherford Appleton Laboratory.

Jonas Reinhold (Nienhagen, Germany) is graduating in May 2020 (B.Sc. in Physics; minor in mathematics). Jonas is a competitive swimmer at NMU. He has been selected as team captain his senior year. Throughout his four years of competing at the collegiate level, he has been part of several school‐record breaking relays, became a three‐time GLIAC champion and competed at the NCAA national swimming championships every year, earning All‐American honors his sophomore year. Next for Jonas is starting his career at Audi where part of his initial employment includes completing a ‘Robotics, Cognition, Intelligence’ masters program in Munich, Germany, which is a blend of disciplines specific to his new position, including aspects of mechanical engineering, electrical engineering, and informatics. 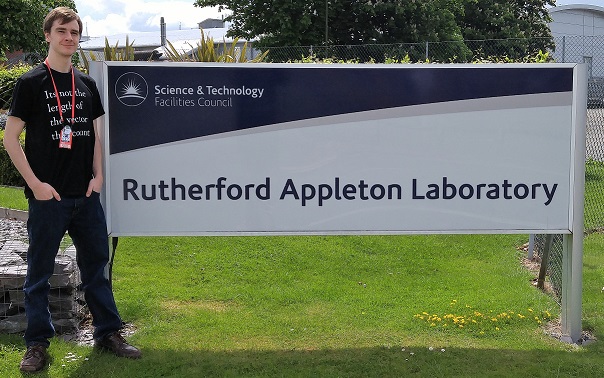 Jarryd Horn (Lindley, NY) is a McNair scholar who graduated in May 2019 (B.Sc. Physics; B.Sc. Mathematics). Starting in fall 2016, Jarryd was meaningfully involved with the NMU solid-state physics research group (Dr. P.W. Mengyan) that included work at laboratories in England and Canada with a main focus on understanding the behavior and stability of hydrogen impurities in TiO2. With a broad range of applications, understanding how hydrogen behaves and affects the local and bulk properties of materials is essential for effective device development. He also conducted research at The Center for Emergent Materials at The Ohio State University (summer 2018). Jarryd gave six presentations related to his work, contributed to presentations at international conferences (by his research adviser), and produced results that form the core of two publications. In fall 2019, Jarryd started graduate school at the University of Maryland where he is working towards becoming a research scientist focusing on material characterization.

​Rachel Hunter started the physics program as a freshman fellow, working in the university observatory and lab.  She presented her work at the annual Celebration of Student Research and Creative Works.  Subsequently she was awarded a summer research experience at Vanderbilt University, and presented the results at the national meeting of the American Physical Society in New Orleans.  She is a member of the Mortar Board honor society, and president of the Physics Club.

Her extra-curricular activities include helping with events at the regional Science Olympiad each spring, working for the campus tutoring center, and coaching gymnastics.  She will graduate in May with a BS in Physics and minors in mathematics and biology.  After graduation, she plans to pursue a career in health-care data analysis and informatics.

When not on the academic treadmill Rachel likes to go hiking, camping, and take pictures.  And teach gymnastics to munchkins.  The physics department wishes her continued success.

Sophia Harding graduated with a BA in Secondary Education / Physics, including minors in Chemistry, Biology, AND Mathematics.  Those who taught her found her work exceptionally thorough and insightful, often with the additional feature of intricately drawn dragons and other characters in the margins and other open spaces.

A Marquette native, she continues to be active in choir singing, and enjoys a number of arts and crafts.  (Several of her former professors’ offices enjoy examples of her work.)  She is currently working full-time as a Senior Library Assistant at the NMU library, where much of the spectacular display above the front desk is of her creation.

In the picture, Dr. David Donovan, Physics Department Head, is presenting Sophia with a three volume set of The Feynman Lectures on Physics.

Alic Spellman has done outstanding work in the physics program, despite having to play catch up after switching from another major.  He's engaged, self-motivated and has a great sense of humor!  He has done a small project for the university observatory, and is very interested in planetary exploration and instrumentation (for example, the Mars rovers). His department seminars on astrophysics stimulated much discussion afterward.  Alic has applied to the Ph.D. programs in applied physics and space sciences at the University of Michigan, and we wish him continued success.

Arika Egan is a dual major in physics and philosophy who has done outstanding work both in the classroom and in outside interests. She worked on astronomical observation and image-processing for four years starting as a Freshman Fellow and this past summer as part of the National Science Foundation's Research Experience for Undergraduates program at the University of Wyoming. Parts of her work have been presented at the Argonne National Laboratory undergraduate research conference, and as a poster at the most recent meeting of the American Astronomical Society.
In addition to her scientific interests, she is the founder of the NMU Social Justice Committee and plays in the NMU jazz band and combo. She will graduate in May with full university honors, after completing a capstone project based on her work tutoring students in the introductory physics classes. After graduation she plans to spend some time as an adjunct instructor in the physics department and working in the university observatory, while studying for her GRE and making applications to graduate programs in physics education. 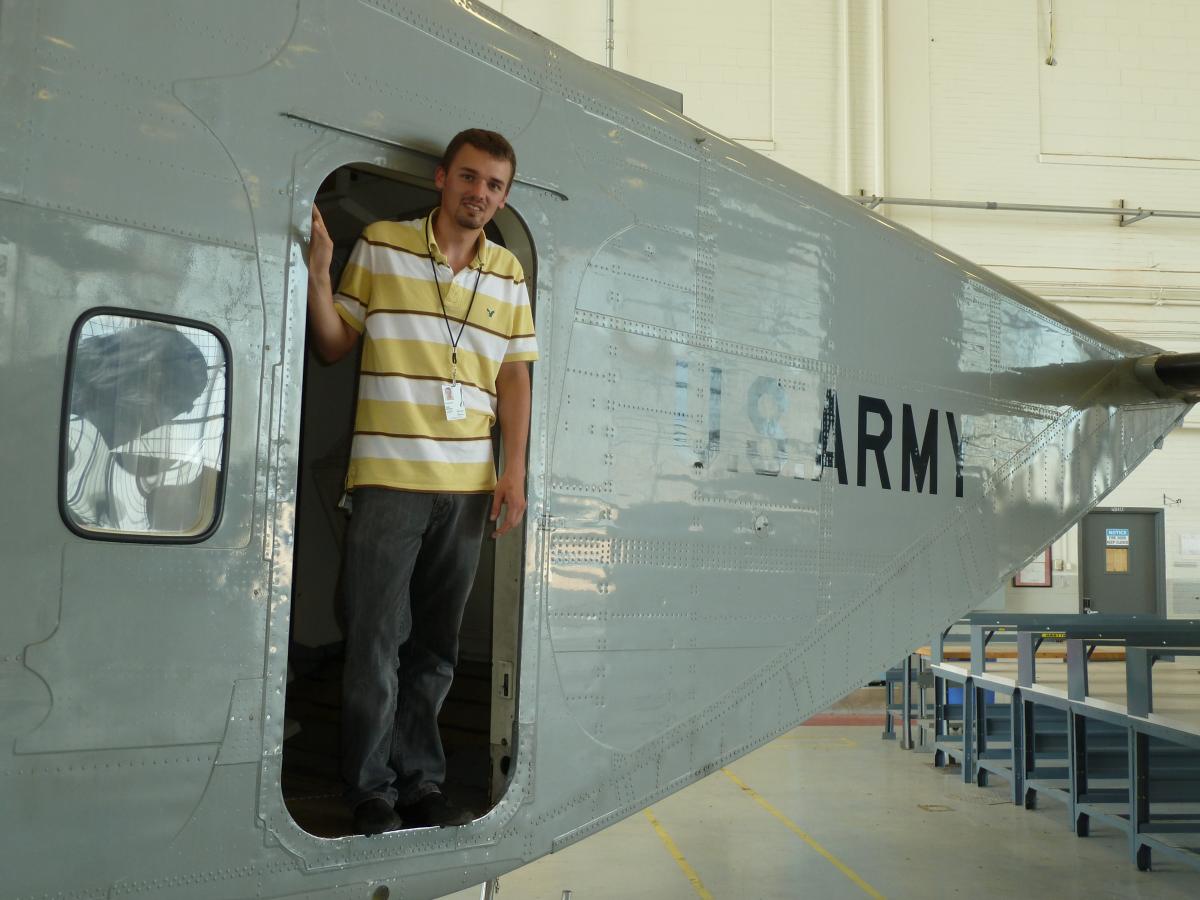 Erik Wisuri was named the Outstanding Graduate in Physics and will be honored at the University Honors Reception in April.

Erik started at NMU in Fall 2009.  He worked in Olson Library as a student web assistant all 4.5 years. The major things he did at the library was developing an online room reservation system, and an online staff scheduling system. With the Physics Club, he's helped with Science Olympiad, Kaleidoscope, and Sandy Knoll. He has also worked on two research projects with Dr. Mounia Ziat from the Psychology department.

His internship at NASA was with Dr. John Moisan, an oceanographer at NASA’s Wallops Flight Facility. He worked on converting ecosystem models to a format suitable for genetic algorithms, and developed a software framework to simulate the converted models over time.

Amelia Shirtz, who graduated in December 2012 with a double major in Physics and French, was chosen as the outstanding graduating senior in physics. Shirtz was honored at the University's annual Honors Reception in April.