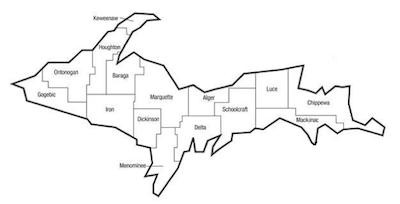 I have been interested in the ethnic history of Michigan’s Upper Peninsula since 1974, when I first agreed to write an article on the Scots of Marquette County. This was followed by research and writing on Native Americans in the region. In 1982, representatives of the Paisano Clubs of the Upper Peninsula and later the Michigan Council for the Humanities provided funds for my grand study of the Italians in the Upper Peninsula which ran for some two years (1983-1985). During this time some 300 photographs and a similar number of oral interviews were gathered from throughout the Peninsula. Over the years I continued my work interviewing people of Cornish, Slovenian, and German backgrounds (among others). The result was a number of publications on ethnic topics.

While conducting this work I developed the idea of going through the 1910 Federal census of the Upper Peninsula and listing the population of the immigrants and their occupations. Why the 1910 census? This census was the high-water mark for immigrant population in the Upper Peninsula. After that date people left for the auto industry in southern Michigan and the natural resources of the region were on the decline which caused more people to leave.

The actual project began in the winter of 1984 when I taught a Public History class to a small number of students: Elspeth Gibbs, Charles Montney, Jody Oliver. Rather than having the students conduct a research project I had them

work in groups on two counties: Iron and Marquette. Both studies were privately published in 1984 and 1986.

In the years that followed I thought it would be wise to include three of the more populous counties in the Upper Peninsula: Chippewa, Dickinson, and Houghton. A number of interested students working on a directed study completed work on these three counties. At that time we did not have computers to make the table-making process possible. As a result, the early completed surveys were typed on graph paper with a great deal of maneuvering to get some of the larger numbers to fit. If any errors were made, or not all of the information available, it meant that the survey was either incomplete or listed out of alphabetical order.

The project came to an end sometime in the 1990s. Then, around 2001, it was revived when Mary Mikhael needed a project for summer employment. She took information from the microfilm reader and made the traditional lists. These notes were filed and kept in a safe place.

Then, in the waning days of 2005, Dan Brown came along and needed a handful of credits to graduate on time. Between December 2005 and into 2006, he worked on Gogebic and Keweenaw Counties and wrote a special report on his findings. The project continued and moved forward with much of the work done throughout 2006. The project was again revived and brought to completion during the summer of 2009 and the winter of 2010.

The final townships and wards were read and made into tables. The last ward to be put into a table and corrected was Quincy Township, done on January 12, 2010. The project ends on the 26th anniversary of its start!

At times it seemed like this project would never come to a conclusion, but here it is. It is hoped that the researcher will be able to use it to positive effect. The information will allow an individual to get into the smallest township in the Upper Peninsula.

Every opportunity was taken to be sure that all of the information provided here is accurate. There were some problems with the legibility of some of the hand-written pages of the census and their lack of use is appropriately noted. No census is completely accurate so you might find some errors.