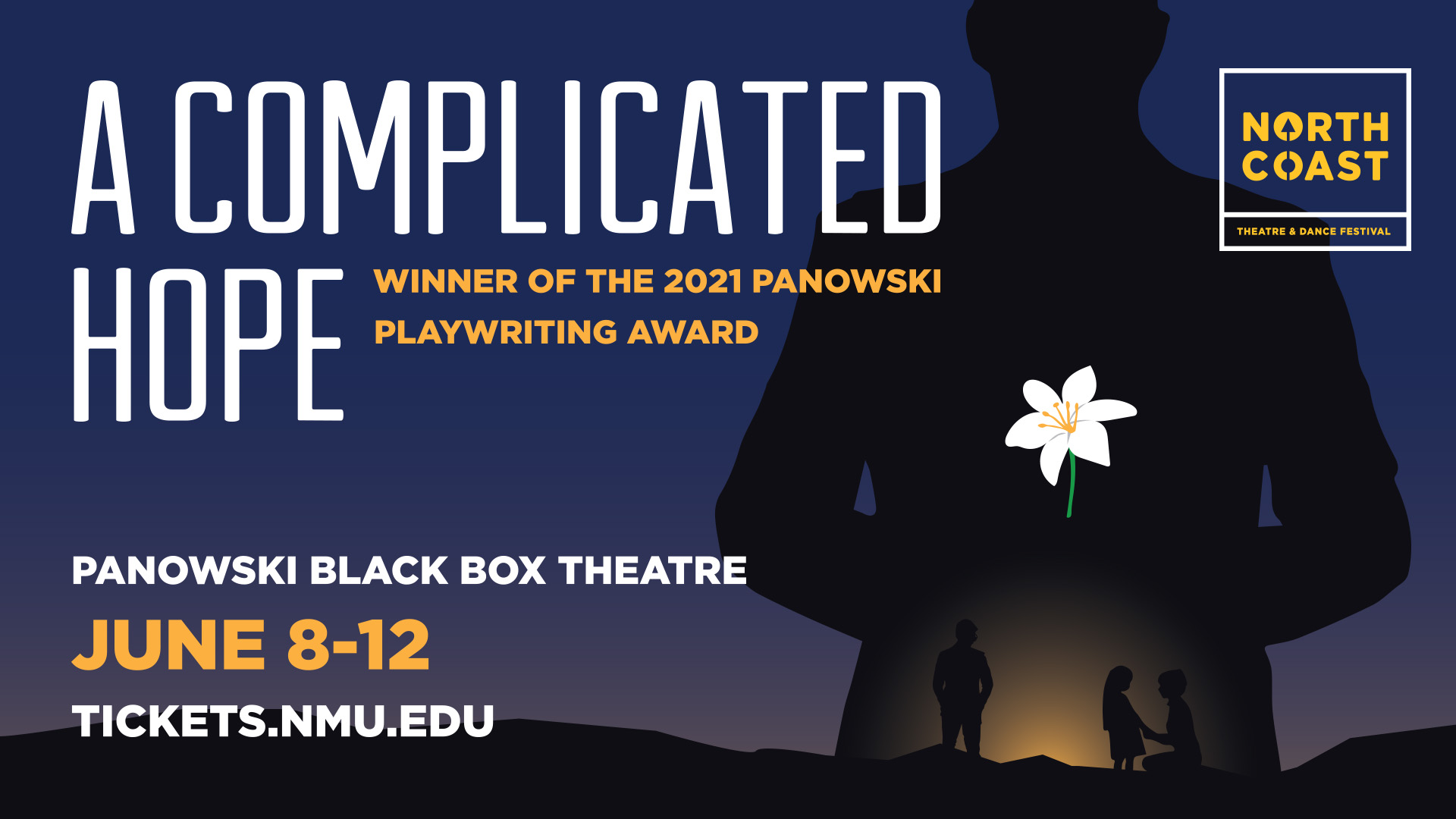 A Portrait of Love, Loss, and Coming Together
WINNER OF THE 2021 PANOWSKI PLAYWRITING COMPETITION
Written by John Mabey
Join us for the world premiere of our 2021 Panowski Playwriting Award winner! Marie and her daughter, Rose Marie, are left adrift after their husband/father, Michael, passes away, leaving a shocking secret behind him. Arnie, Michael’s boyfriend, yearns to heal those who’ve been hurt and unexpectedly discovers a family of his own. Mirroring the erratic path of grief itself, this beautiful play flashes between the moments in time that change us all. A Complicated Hope explores the challenges of both finding a family of choice and letting yourself be found.

Adam Maslak (Arnie) appeared in several productions at the Forest Roberts Theatre during his time at NMU, including Tell-Tale (Edgar Allan Poe) and Epic Proportions (Benny Bennet). Adam also played Arnie in the workshop reading of A Complicated Hope last summer. He is grateful for this opportunity and hopes you enjoy the show.

Devon Grice (Marie) is a stand up comic from Detroit. She’s been living in Marquette, Michigan for 15 years and calls it home. She has appeared on stage as a Dancer in UPShakes’ 2017 production of Tennessee Williams’ A Streetcar Named Desire, where she used her superior skill to embody the pulse of New Orleans. Devon played Madeleine LeClerc in Wolf’s Head Theater Company’s October 2019 production of Quills by Doug Wright. Her son, Langston Elliot, is a real prince and they spend their time making music together, exploring beaches, writing jokes, and wrestling.

Maya Moreau (Rose Marie) is a rising sophomore BFA Musical Theatre student here at Northern Michigan University. She has appeared in various shows at NMU within her first year, including Above the Timberline (Captain Lathom), Elf the Musical (Mrs. Greenway), The Wolves (#14), and The Producers (Ensemble). She was also recently elected to the Student Advisory Board for the Department of Theatre and Dance. In Maya's free time, she is diligently working to start a Metaphysical Company.

John Mabey (Playwright): John Mabey's plays have been produced on stage in seven countries and throughout the United States. They are also a certified Mental Health Counselor and published author on the topics of sexual identity and spirituality in academic books and journals. Recent awards for full-length plays include the 2021 Panowski Playwriting Award, the 2022 Essential Theatre Playwriting Award, and the 2022 Getchell New Play Award. Over the past year, they also had plays published in Smith & Kraus 'Best 10-Minute Plays,' 'Best Women’s Monologues,' and 'Best Men’s Monologues.' When not writing, John enjoys teaching and performing improvised comedy and true storytelling around the world. https://mabeyplays.com/

Paul Truckey (Director) has been a member of the NMU theatre faculty since 2003. While at NMU, he has directed numerous productions including The Producers, Romeo and Juliet, Cats, Noises Off, Building Madness – 2016 Panowski Playwriting Award (PPA) winner, Into the Woods, A Paper Tiger in the Rain – 2014 PPA winner, The Comedy of Errors, 1776, The 25th Annual Putnam County Spelling Bee, A Flea in Her Ear, The Mousetrap, ACTletes, The Foreigner, The Full Monty, Cat on a Hot Tin Roof, Tell-Tale – 2006 PPA winner, Closer Than Ever, Burning Mona Lisa in the Reptile House – 2004 PPA winner, and Our Town. Among his acting credits are leading roles in Les Miserables (Broadway and national touring companies, over 2,600 performances), A Little Night Music, Rockland, The Fantasticks, The Problem, Utah! The Musical (Original Company), Sunday in the Park with George, Guys and Dolls, Romeo and Juliet, Nine, Three Sisters, The Mikado, and She Stoops to Conquer. His TV credits include The Rosie O’Donnell Show, The Today Show, and the 1998 NBA All-Star Game Halftime show. Paul is a member of Actor’s Equity Association.

Lex van Blommestein (Scenic Designer) is a theatre designer based out of Marquette, MI. While he currently teaches at Northern, he also maintains a prolific national and international design career. Lex earned his MFA from Wayne State University's Hilberry Repertory Program in Detroit, and has lived, designed, and taught in Edwardsville, IL; St. Louis, MO; Cincinatti, OH; Raleigh, NC; Memphis, TN; Milwaukee, WI; Detroit, MI; Lansing, MI; Windsor, ON; and Amsterdam, NL, to name a few. In addition to his love for scenic design, he enjoys using design to explore audience reaction, interaction, and emotion, and to create experiences involving virtual reality and augmented reality as well as immersive design.

Joel Shinavier (Costume Designer) is a recent graduate of Northern Michigan University’s theatre program. While at school, he designed multiple productions, including The Producers, Elf the Musical, an/one's ivory tower, and Significant Other. Additionally, he worked all four years of undergrad in the FRT costume shop and served as Assistant Manager his senior year. He has also spent three summers with Mason Street Warehouse Theater at Saugatuck Center for the Arts downstate.

Marla Alden (Lighting Designer) is a BFA Theatre Technology and Design student focusing on lighting. She is currently the house Master Electrician for the summer at the Forest Roberts Theatre. She also works as the student supervisor of the FRT electrics shop during the school year. Her latest work was an assistant lighting design on Next to Normal. Marla is looking forward to the upcoming work for the summer and into the semester.

Keli Crawford-Truckey (Properties Designer) serves as a teacher, director, and properties master at NMU. Recent FRT directing credits include The Wolves, Above the Timberline, The Full Monty, Proof, Sweeney Todd, Bears, Doubt, Harvey, and Into the Woods. She has worked as a stage manager/staff member on the Broadway and national touring companies of Les Miserables, and on off-Broadway productions including And Miss Reardon Drinks a Little at the Producers Club and Cloud Nine at the Bank Street Theatre in NYC. Keli holds a degree in Directing and Performance from the University of Nevada, Las Vegas.

Dan Zini (Sound Designer) is an award-winning designer and engineer in both live and broadcast sound and media with over a decade of professional experience. He also works as a composer, studio engineer, musician, and programmer, holding many internationally recognized certifications. Dan’s client list is extensive and includes Andy Grammar, Keith Secola, Samantha Fish, Carlos Nunez, Alash, Sandra Joseph, Joshua Davis, LDI Las Vegas, Hershey Entertainment, and various theatre companies, serving on over 100 productions including The Wizard of Oz, Les Miserables, and Mary Poppins. At NMU’s School of Music Theatre and Dance, as well as the Department of Media Studies, Dan currently serves as an instructor in sound and media as well as the sound and media supervisor and engineer.

Braeden Ingersoll (Technical Director) is from Des Moines, IA and recently received his MFA in Technical Production from Florida State University where he strove to advance his knowledge in the industry and as an educator. Prior professional credits include Technical Director for Des Moines Metro Opera & Theatre Aspen and Assistant Technical Director for Creede Repertory Theatre. Braeden is also an active member of the United States' Institute for Theatre Technology (USITT) having served as President for a Graduate Student Chapter & earning the Director's Choice Award for the USITT/ASTC (American Society of Theatre Consultants) Renovation Challenge in 2019.