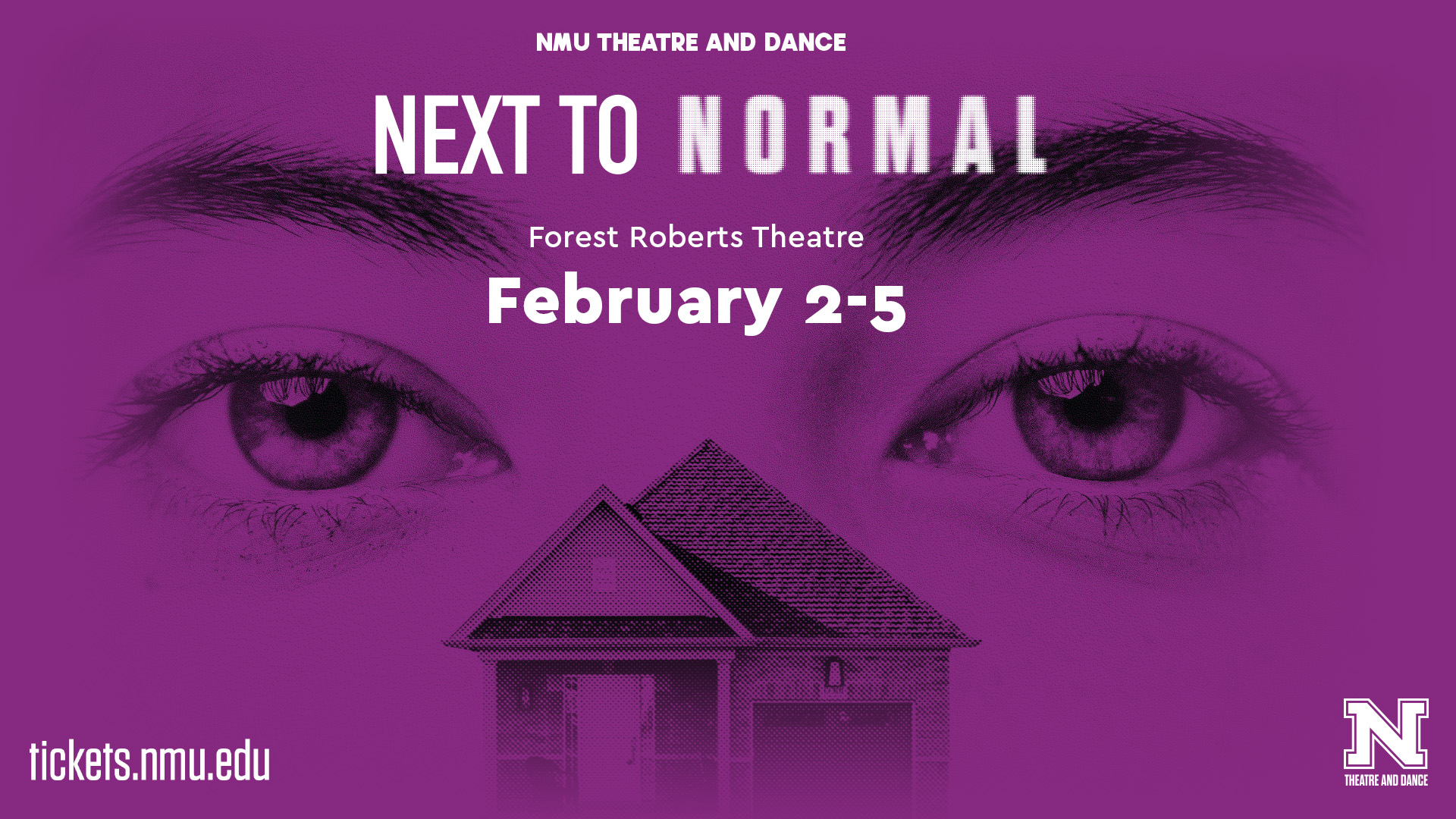 A Deeply Moving Family Drama
Music by Tom Kitt, Book and Lyrics by Brian Yorkey
An intimate exploration of family and loss, this rock musical tells the story of Diana Goodman, a suburban mother suffering from bipolar disorder. Haunted by a ghost from her past, she tries to come to terms with her grief as her husband and daughter desperately long for a return to normalcy. At times delightfully funny and at others intensely raw, in the words of The New York Times, this is a “feel-everything” show.

NOTE: This production contains strobe effects as well as haze and atmospheric effects. This show is rated PG-13 and contains strong adult language as well as depictions of mental illness, a suicide attempt, electro-convulsive therapy, drug abuse, and depression. These themes may not be suitable for younger audience members; parental guidance is strongly suggested.

Next to Normal is presented through special arrangement with Music Theatre International (MTI). All authorized performance materials are also supplied by MTI. www.mtishows.com

Just Another Day - Company
Everything Else - Natalie
Who's Crazy?/My Psychopharmacologist and I - Dan, Diana, Dr. Fine, Company
Perfect For You - Henry, Natalie
I Miss the Mountains - Diana
It's Gonna Be Good - Dan, Company
He's Not Here - Dan
You Don't Know - Diana
I Am The One - Dan, Gabe, Diana
Superboy and the Invisible Girl - Natalie, Diana, Gabe
Doctor Rock - Dr. Madden
I'm Alive - Gabe
Make Up Your Mind/Catch Me I'm Falling - Company
I Dreamed a Dance - Diana, Gabe
There's a World - Gabe
I've Been - Dan, Gabe
Didn't I See This Movie? - Diana
A Light in the Dark - Dan, Diana

Katherine Marsh (Diana) is a theatre major at Northern with a focus in stage management and also currently works as the Operations Manager for Double Trouble Entertainment. She would like to thank her friends, family, and theatre community for supporting her return to performance! After several years stage managing shows (including Mamma Mia!, A Christmas Story, and Building Madness at the Forest Roberts Theatre and EDGE of Orion’s The Little Mermaid Jr.,) she is thrilled to be back onstage as Diana in this production. She also thanks you all for being a part of this incredible experience.

John Fatla (Dan) is so excited to be performing in NMU’s production of Next to Normal. Some past NMU credits include The Full Monty and A Christmas Story. John is a junior pursuing a degree in secondary music education with a choral concentration. He hopes to one day direct a wonderful choir at the collegiate level and make amazing music. You may also have seen John in NMU music ensembles such as University Choir, the NMU Arts Chorale, and the NMU Jazz Band, where he wails on the T-bone like there’s no tomorrow. He would like to thank Sophie, Donna, and the entire cast and crew of Next to Normal. He hopes you enjoy the show.

Megan Hibbard (Natalie) is a senior pursuing a BA in Theatre with a focus in lighting design a minor in art and design. She loves to be on and behind the FRT stage! In the past she has been Lisa in Mamma Mia!, a dancer/choreographer and assistant lighting designer in What We Leave Behind, and Bombalurina and assistant lighting designer in Cats. Her latest designs include North x North Coast, Spotlight Variety Show, North Coast Dance Festival, and Elf the Musical! Megan wants to thank the entire cast and crew, as well as her friends and family, for all of their support.

Michael Ahlstrom (Gabe) is a sophomore at Northern Michigan University. He was born and raised in Marquette, MI and graduated from Marquette Senior High School in 2019. He was originally majoring in digital cinema but after his freshman year changed it to theatre when he found a real love for acting. Next to Normal will be Michael’s first musical, and with the amazing cast and crew that have guided him through this journey he knows that he will look back on this show in a very special way.

DaShawn Mitchell (Henry) is a freshman BFA Musical Theatre student here at NMU who has been in two productions so far: Above the Timberline (Sam) and Elf the Musical (Walter). He also works as an electrician in our electrics shop and is currently working as the sound designer on The Wolves.

Quinn Skelly (Dr. Fine/Dr. Madden) is in his first year at Northern as a musical theatre major. He was born and raised in Chicago, IL. This will be his third show at NMU and he’s very excited, as it has been a very fun and rewarding experience overall. Quinn hopes everyone enjoys the show as much as he has enjoyed helping to create it.

Sophie Sam (Director) is a director, actress, and magician. Graduating from NMU this spring with a BS in Theatre and Entertainment Arts, she is also an alumna of the National Theater Institute. She directed the world premieres of The Question Game by Ashley Lauren Rogers at Trans Theatre Fest, an/(one’s) ivory tower at Northern Michigan University, and Happiness is Homemade by Quinn Xavier Hernandez with Superior Arts Youth Theater. She also directed Open by Crystal Skillman with Party Claw Productions, touted by Time Out New York as one of the best pieces of live theatre to stream that week, and directed Screaming, Humming by Hannah Manikowski for North x North Coast 2020. Sophie is a member of Ring of Keys.

Donna Schaffer (Vocal Music Director) is currently serving as the Choir Director at Ishpeming Public Schools and Assistant Professor of Voice at Northern Michigan University. Prior to this appointment, she served as Director of Choral Activities at Allen University in Columbia, SC, Director of Choral Activities and Vocal Instructor at Alcorn State University in Lorman, MS, a lecturer in voice at the University of Connecticut, and Music Director for the Shreveport Opera, among other positions. Ms. Schaffer holds fast to the simple teaching philosophy of Nelson Mandela. This proverb states, “Each one teach one.” Donna holds a Bachelor's of Music from the University of Michigan, a Master's of Music from the University of Connecticut, and a Doctorate of Musical Arts in Choral Conducting at USC under the tutelage of Dr. Larry Wyatt.

Lex van Blommestein (Scenic Designer) is a theatre designer based out of Marquette, MI. While he currently teaches at Northern, he also maintains a prolific national and international design career. Lex earned his MFA from Wayne State University's Hilberry Repertory Program in Detroit, and has lived, designed, and taught in Edwardsville, IL; St. Louis, MO; Cincinatti, OH; Raleigh, NC; Memphis, TN; Milwaukee, WI; Detroit, MI; Lansing, MI; Windsor, ON; and Amsterdam, NL, to name a few. In addition to his love for scenic design, he enjoys using design to explore audience reaction, interaction, and emotion, and to create experiences involving virtual reality and augmented reality as well as immersive design.

Matthew Weber (Lighting Designer) attended Wayne State University in their BFA Technical Theatre program. He currently serves as the Auditorium Manager for the Walled Lake Consolidated Schools in Walled Lake, MI where he manages the operations of three high school auditoriums and teaches the students about all aspects of technical production. Matthew also runs MCW Designs (http://www.mcwdesigns.com), a freelance company providing lighting, scenic, and consulting for high school, community theatre, and professional theatre. Matthew is also a design consultant for several amusement parks around the country including Cedar Point in Sandusky, OH, Dorney Park in Allentown, PA, and Kings Island in Cincinnati, OH. Some recent projects include lighting “Midnight Syndicate Live” at Cedar Point’s Haunt and the “Grand Carnivale Parade” at Dorney Park.

Ryan Harvey (Sound Designer) is a second year theatre technology and design major focusing on sound and visual media. He got started in the technical theatre world by getting stranded at his older brother's rehearsal in his freshman year of high school and hasn't escaped since. Recently he has packed his schedule, working on Above The Timberline, the Spotlight Variety Show, and CO/LAB COLLECTIVE while also being employed in the electrics shop.

Keli Crawford-Truckey (Properties Designer) serves as a teacher, director, and properties master at NMU. Recent FRT directing credits include The Full Monty, Proof, Sweeney Todd, Bears, Doubt, Harvey, and Into the Woods. She has worked as a stage manager/staff member on the Broadway and national touring companies of Les Miserables, and on off-Broadway productions including And Miss Reardon Drinks a Little at the Producers Club and Cloud Nine at the Bank Street Theatre in NYC. Keli holds a degree in Directing and Performance from the University of Nevada, Las Vegas.

Amarae’ Robinson (Assistant Lighting Designer) is a first year BFA Musical Theatre student who also works in technical theatre and has a background in music. She enjoys building her craft in all areas of the theatre. In her time at the FRT, she has appeared as Linea in Above the Timberline. She has previously performed with Crossroads Repertory Theater and the Avondale Theater Company. Amarae’ has enjoyed her time working as Assistant Light Designer for Next to Normal. She is looking forward to continuing her technical and acting work in the upcoming productions of The Wolves and The Producers this spring.

Braeden Ingersoll (Technical Director) recently received his MFA in Technical Production from Florida State University where he strove to advance his knowledge in the industry and as an educator. Prior professional credits include Technical Director for Des Moines Metro Opera & Theatre Aspen and Assistant Technical Director for Creede Repertory Theatre. Braeden is also an active member of the United States' Institute for Theatre Technology (USITT) having served as President for a Graduate Student Chapter & earning the Director's Choice Award for the USITT/ASTC (American Society of Theatre Consultants) Renovation Challenge in 2019.

Sylvia Bednarczyk is thrilled to work as the Production Stage Manager on the Forest Roberts Theatre stage for the first time! Sylvia is a junior BFA Theatre Technology and Design student from Oak Lawn, IL. Previously, Sylvia has worked as an assistant stage manager for Oak Park Festival Theatre’s The Tempest and NMU’s Romeo and Juliet. Apart from working in the theatre, Sylvia is an active member of the Student Leader Fellowship Program as well as Conspectus Borealis, and she serves as Alpha Psi Omega’s Vice President.

Erin Hope (Stage Manager) is from Kalamazoo, MI and is pursuing a B.A. in Theatre and Entertainment Arts with minors in English and Deaf studies. This is her third year attending NMU, and her work at the Forest Roberts Theatre includes Elf the Musical (Assistant Scenic Designer), Above the Timberline (Assistant Media Designer), Romeo and Juliet (Script Supervisor), and Twelfth Night (Builder, Painter, and Run Crew).