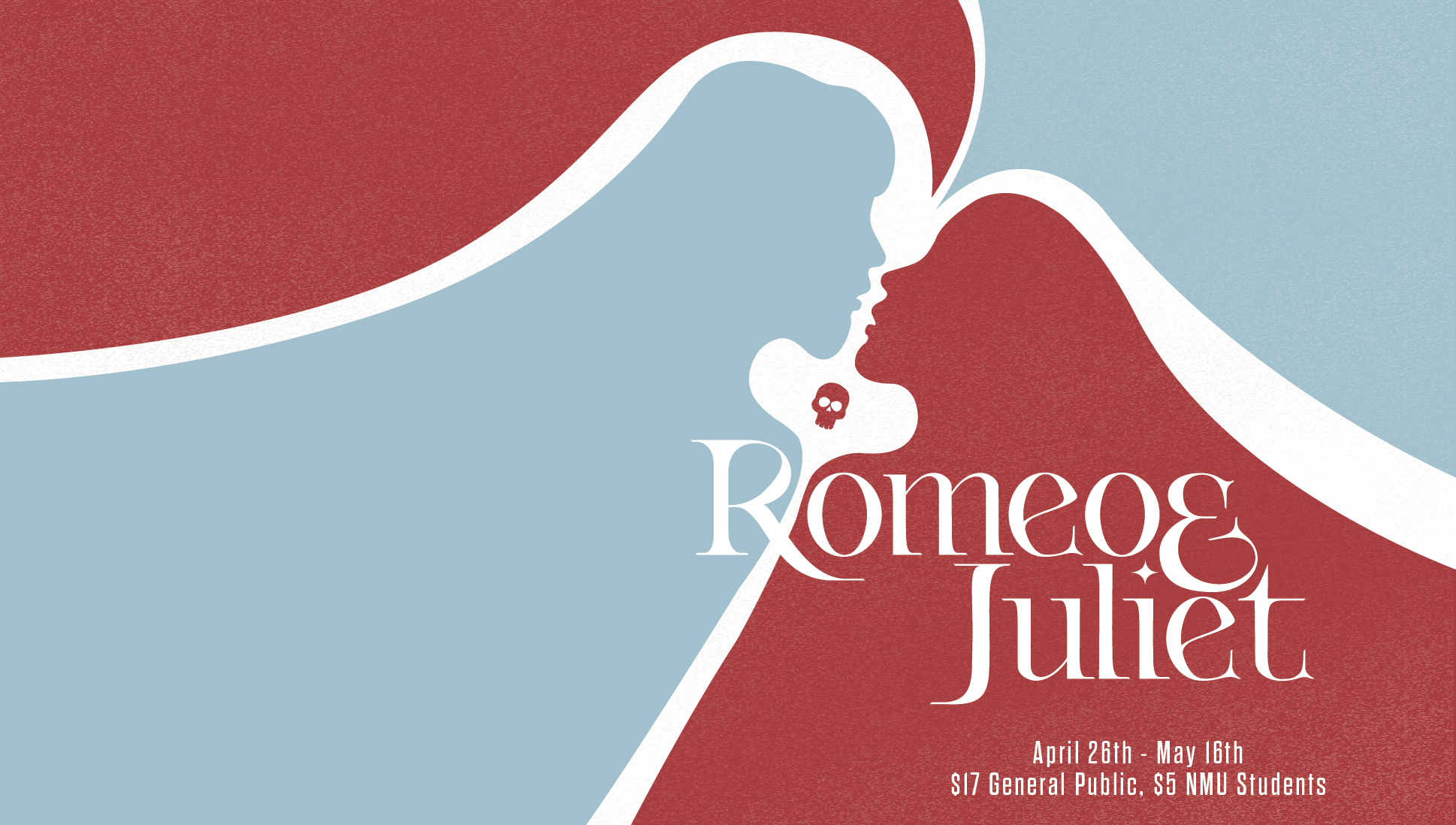 A Modern Twist on a Literary Classic
Written by William Shakespeare
Shakespeare’s infamous tale of two star-crossed lovers comes to life on the Forest Roberts Theatre stage in this new adaptation of the work. Their families are sworn enemies, but that doesn’t stop Romeo Montague and Juliet Capulet from falling instantly in love with each other. Though their union is forbidden, the two hatch a plan to be together against all odds. A secret marriage, a love triangle, a death plot… this well-known tragedy will have you hooked, even if you know the ending. This production will be professionally filmed and released.

NOTE: These dates have changed from our original schedule. Please click here for a full press release.

A link to the filmed performance will be emailed to ticket holders before their chosen date. Ticket holders will be able to watch the performance as many times as they would like during the dates listed above.

Sophie Shrauger (Romeo) is a freshman musical theatre BFA candidate at NMU. In her time on campus so far, she has already been cast in five productions! Sophie hopes to pursue a career in musical theatre or film acting. She hopes that audiences will thoroughly enjoy this fresh take on this widely known classic, and will be left with a new perspective on what love truly looks like when everything else seems bleak. “This pandemic has really forced everybody to realize that living a life without contact can be hell on earth for an insane amount of people," Sophie says. “This production really highlights just how impactful that one touch can be, and I’m excited for people to connect with Romeo and Juliet on a whole new level!”

Rebecca Piepszak (Juliet) is a freshman majoring in musical theatre and Romeo and Juliet is her second show with the NMU Theatre and Dance Department. Her favorite part of the show is the unique twists and truth behind the story. She hopes that everyone who watches R&J enjoys it and knows that she had an amazing time being amongst so many amazing actors!

Jacob Laitinen (Capulet) is a native of Marquette, MI and a senior theatre major at NMU. He plans to get his Master's after graduation and is ecstatic to be performing in Romeo and Juliet as his last play at Northern. Jacob's previous roles at NMU include Beadle Bamford in Sweeney Todd, Thenardier in Les Miserables, Professor Porter in Tarzan, and Creon in Antigone. Additionally, he has worked professionally in the theatre world before coming back to NMU to get his degree. Jacob wants to thank everyone for supporting the theatre, and he hopes you enjoy this timeless classic.

Kaylie Goodno (Lady Capulet) is a freshman at Northern Michigan University and is from southeastern Wisconsin. She is currently both a musical theatre major and a music major. Kaylie hopes you enjoy the show!

Ashley Gardner (Nurse, Lady Montague, Third Watchman) is a transfer senior at Northern Michigan University and is currently pursuing a major in theatre with a performance emphasis. This will be Ashley’s third show at NMU following her previous roles as Nella Walker in War of the Worlds and the Young Lady in A Christmas Carol. Ashley is blessed to be a part of such a wonderful, creative cast and can't wait for audiences to see the show!

Noah Proctor (Benvolio) is currently in his second year at NMU pursuing a degree in theatre and entertainment arts. With most of his gen eds out of the way, he is excited to be getting more involved with the theatre department and the people within it. Noah has previously appeared in Significant Other and A Christmas Carol and is hopeful of being able to perform for live audiences again in the near future. In the meantime, he is grateful for the opportunity to be able to work on a project like this in person.

Ethan Puisto (Friar Laurence, Abraham) is a music major at NMU, but has many years of theatrical training under his belt. He has attended the esteemed Chicago College of Performing Arts as a musical theatre major, as well as Northwestern University's Cherubs Theatre Intensive. Ethan has been a lead singer in many bands, and releases self-produced music independently under the project alias "Fidget Bleach." He enjoys drag performance, music production/songwriting, found fashion, and pushing the limits of the performing arts.

Paul Truckey (Director): As a Director, Paul has staged over 30 productions including Romeo and Juliet, Cats, Noises Off, Building Madness, Into the Woods, A Paper Tiger in the Rain, A Comedy of Errors, 1776, The 25th Annual Putnam County Spelling Bee, A Flea in Her Ear, The Mousetrap, ACTletes, The Foreigner, The Full Monty, and Cat on a Hot Tin Roof. Paul's acting credits include leading roles in over 50 productions, most notably the roles of Grantaire, Javert, and Thenardier in the Broadway and national touring companies of Les Miserables, Fredrik in A Little Night Music for the Pine Mountain Music Festival, Pete the Barber in the world premiere opera Rockland, George Jr. in the original company of Utah! The Musical at the Tuacahn Amphitheatre, and Nathan Detroit in Guys and Dolls at the Interlochen Center for the Arts. Paul is currently a professor of theatre at Northern Michigan University, and a member of the Actors Equity Association.

Clair Kaminski (Costume Design) is a junior at NMU working towards a Bachelor of Fine Arts degree in theatre technology and design with a concentration in stage management. Clair has worked on several shows at NMU on the stage management teams; however, this is her first time costume designing for an NMU Theatre and Dance production. Working on the costume design for Romeo and Juliet has been a really fun experience for Clair, and she is really grateful for the opportunity to stretch her creativity with the experience of a different part of the theatre program.

Lex van Blommestein (Costume Design/Lighting Design) is a theatre designer based out of Marquette, MI. While he currently teaches at Northern, he also maintains a prolific national and international design career. Lex earned his MFA from Wayne State University's Hilberry Repertory Program in Detroit, and has lived, designed, and taught in Edwardsville, IL; St. Louis, MO; Cincinatti, OH; Raleigh, NC; Memphis, TN; Milwaukee, WI; Detroit, MI; Lansing, MI; Windsor, ON; and Amsterdam, NL, to name a few. In addition to his love for scenic design, he enjoys using design to explore audience reaction, interaction, and emotion, and to create experiences involving virtual reality and augmented reality as well as immersive design.

Seth Bowen (Lighting Design) is a BFA Theatre Technology and Design candidate and plans to become a professor of theatre someday! He is originally from Rhinelander, WI and is currently in his senior year here at NMU. Seth has taken part in many different productions at Northern including Sweeney Todd (Police Officer/Ensemble), The Full Monty (Malcolm), Cats (Gus), North x North Coast (What If? Scenic and Props), and A Christmas Carol (various roles). Seth is super excited to be a part of this production of Romeo and Juliet and to have the opportunity to co-design under Lex; it has been an amazing, fun learning experience!

William “Bill” Digneit (Sound Design) is the current production manager for the annual LDI Conference Program (including LDInstitute and LDIntensives) in Las Vegas and also for LDI Mexico. He has been working in production management with LDI for over 10 years. He is passionate about technology education to push the entertainment industry. Bill created the LDI Club Tours five years ago out of necessity to educate the growing festival and club markets. At NMU, Bill oversees the Theatre and Dance Department, markets and promotes the current season, and teaches classes focusing on technical practices applicable in the nightlife and festival venues. Bill is the co-owner of Double Trouble Entertainment, a Michigan based entertainment and production-company focusing on nightclub design and outdoor events. Bill also is part owner of DIGS Gastropub in Marquette, MI.

Emily Kendall (Production Stage Manager) is a senior double majoring in criminal justice and technical theatre with a stage management focus. As the Production Stage Manager for this production, and a graduating senior, Romeo and Juliet will be her last production here at Northern. After graduation, she plans on getting a stage management position/internship. Emily is disappointed that this production can't be "normal" given the current state of things, but she's very glad to have been a part of it as her undergrad years come to an end. She wants to thank the faculty for everything they've done the past four years, and let them know that she'll miss holding office hours with them.

Sylvia Bednarczyk (Assistant Stage Manager) is a sophomore BFA theatre technology and design student. Her previous work at NMU includes: The Full Monty (Deck Captain), A Christmas Story (Assistant Stage Manager), Significant Other (Carpenter/Painter), North x North Coast (Production Manager), and an/(one’s) ivory tower (Properties Design). Sylvia is grateful to have had the opportunity to work on a production during the pandemic, but she can’t wait for live theatre to begin once again!

Erin Hope (Script Supervisor) is from Kalamazoo, MI, majoring in theatre and entertainment arts as well as English with a concentration in writing. This is her second year attending NMU and she aspires to pursue a career in the theatre industry after graduation. She is very excited to be working on Romeo and Juliet in a style that is different from "normal" theatre, and wants to thank everybody supporting the theatre industry.

David Pierce (Production Manager) began teaching at NMU in 2014. Holding an MFA in Theatre Technology for the University of Wisconsin-Madison, David also serves as Technical Director and Production Manager for the Forest Roberts Theatre. His courses include Entertainment Technology 1, Entertainment Technology 2, and Stage Management. He also served as Lighting Designer for past FRT productions of Little Shop of Horrors and Into the Woods. During the summer months, David worked for several years as the Technical Director for the Adirondack Theatre Festival in Glens Falls, NY. A company devoted to new and contemporary work, he has been apart of such productions as Murder for Two, Filming O’Keefe, The Whale, Spun, and others. Before coming to NMU, David was the Technical Director for the Department of Theatre and Dance at Western Kentucky University. Other previous credits include: Four Season Theatre (WI), Forward Theatre Company (WI), and Little Theatre on the Square (IL). David is also an active member in United State Institute for Theatre Technology (USITT).

Keli Crawford-Truckey (Properties Artisan/Manager) serves as a teacher, director, and properties master at NMU. Recent FRT directing credits include The Full Monty, Proof, Sweeney Todd, Bears, Doubt, Harvey, and Into the Woods. She has worked as a stage manager/staff member on the Broadway and national touring companies of Les Miserables, and on off-Broadway productions including And Miss Reardon Drinks a Little at the Producers Club and Cloud Nine at the Bank Street Theatre in NYC. Keli holds a degree in Directing and Performance from the University of Nevada, Las Vegas.