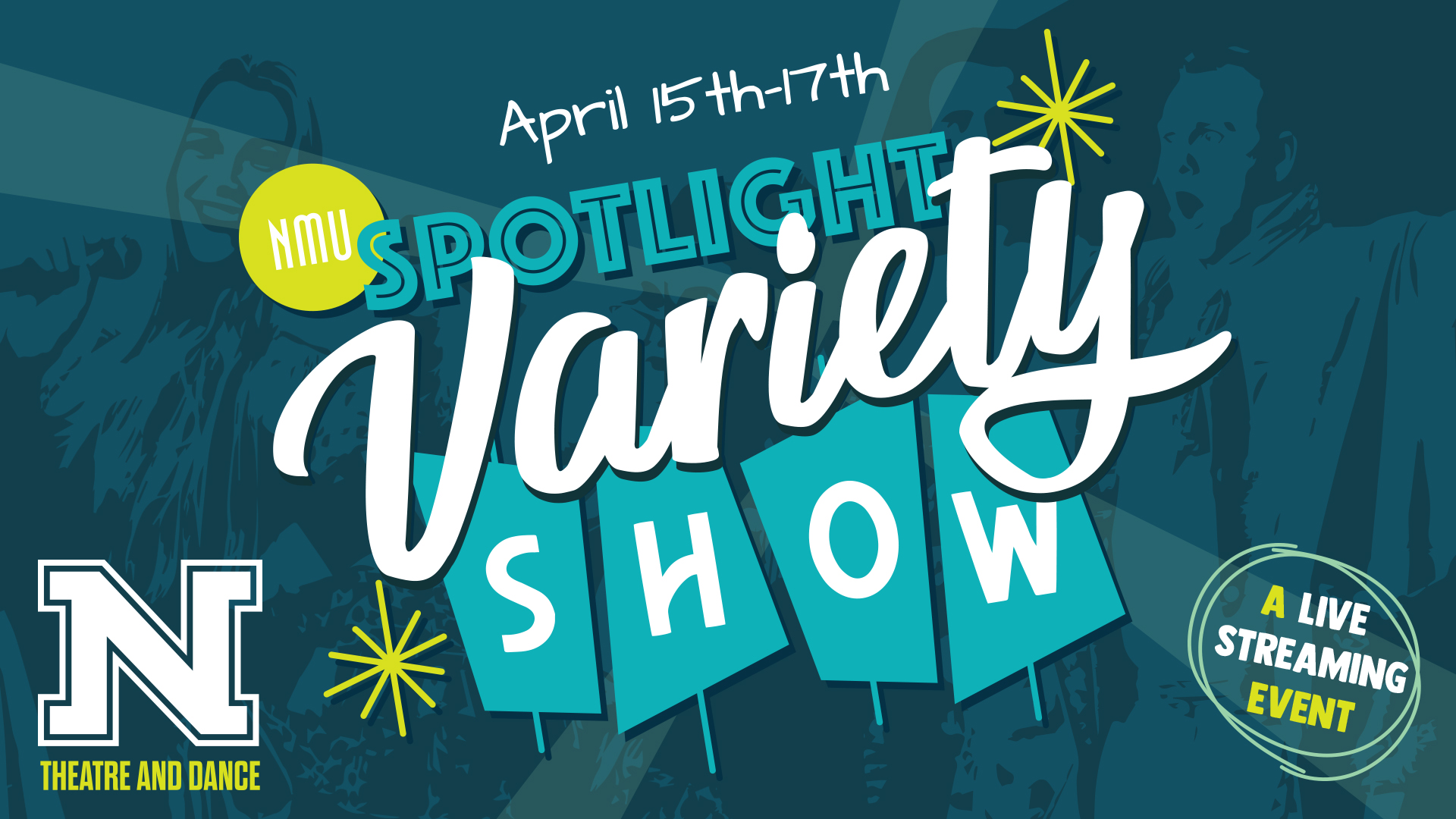 An End-of-the-Year Musical Theatre Showcase
Join the Department of Theatre and Dance at Northern Michigan University for a weekend of celebrating our brightest stars! The BFA Musical Theatre students and BA Theatre students will perform a 1-hour concert of various musical theatre solos and duets to close out our 2020-21 academic season and show off what they’ve been working on this year. This production will be live streamed.

A link to the live stream of the performance will be emailed to ticket holders before their chosen date.

From Pippin
Music and Lyrics by Stephen Schwartz

Wig in a Box

Sit Down You're Rockin' the Boat

From Guys and Dolls
Music and Lyrics by Frank Loesser

I Wanna Be a Producer

From The Producers
Music and Lyrics by Mel Brooks

From Closer Than Ever
Music by David Shire, Lyrics by Richard Maltby Jr.
Bassist: Oskar Martinez

She Loves Me Not

From Closer Than Ever
Music by David Shire, Lyrics by Richard Maltby Jr.
Performed by Dustin Golden, Kate Karling, and Noah Proctor

From RENT
Music and Lyrics by Jonathan Larson

Gracie Fries is a senior here at NMU from Kingsford, MI pursuing a bachelor's degree in dance with a business concentration. Her passion lies in the musical arts with twenty years of dance instruction and vocal lessons. She spent four years teaching and choreographing at Julie’s Top Hat Dance Studio and is currently choreographing at Dawn Dott Dance Studio. She was a pro-dancer in the 2019 “Dancing With Our Stars Marquette County Style, Disney Edition” and co-choreographer for SAYT's 2019 production of Frozen Jr. Gracie has performed in several FRT productions including, Tarzan, Beauty and the Beast, the 2018 Fringe Festival, What We Leave Behind and hopefully more to come! Her hobbies include singing, playing bass, baking, gardening, and spending time with the people she loves. Being one of the first of her family to attend college, she is proud to be a Wildcat with much support from her family, friends, and the Theatre and Dance Department faculty!

Sylvia Gravel is a second-year student studying dance with a minor in biology. She is incredibly excited to be a part of her first production at NMU, as well as her first real venture into musical theatre! Sylvia has been dancing her whole life, and is a second-year member of the NMU Dance Team. She is looking forward to a new and challenging experience of performing via livestream, and would like to thank Jill Grundstrom and her classmates for being a major source of positivity and support during an unusual time.

Ethan Puisto is a music major at NMU, but has many years of theatrical training under his belt. He has attended the esteemed Chicago College of Performing Arts as a musical theatre major, as well as Northwestern University's Cherubs Theatre Intensive. Ethan has been a lead singer in many bands, and releases self-produced music independently under the project alias "Fidget Bleach." He enjoys drag performance, music production/songwriting, found fashion, and pushing the limits of the performing arts.

Sophie Shrauger is a freshman musical theatre BFA candidate and is so excited to be performing in the Spotlight Variety Show! Sophie hopes to pursue a career in musical theatre or film acting, and will likely be moving to New York or LA after graduating from NMU. She will be performing in a multitude of numbers, including her solo “One Perfect Moment” from Bring It On: The Musical! She hopes that audiences will enjoy all of the cast and crew’s hard work, and bask in some real live(streamed) theatre!

Kyra Skinner is a sophomore at NMU from Pickford, MI. She is a double major in dance and psychology with a concentration in development. She has been dancing for 17 years now, and is very excited to be performing again after taking a very long break along with everyone else due to COVID. She is also a part of the NMU Hip Hop Dance Crew and after the Spotlight Variety Show wraps up, she will be performing in the North Coast Dance Festival. She cannot wait for everyone to see the talent NMU has to offer and for her whole family to be cheering her on back home every night via livestream!

Paul Truckey (Director): As a Director, Paul has staged over 30 productions including Romeo and Juliet, Cats, Noises Off, Building Madness, Into the Woods, A Paper Tiger in the Rain, A Comedy of Errors, 1776, The 25th Annual Putnam County Spelling Bee, A Flea in Her Ear, The Mousetrap, ACTletes, The Foreigner, The Full Monty, and Cat on a Hot Tin Roof. Paul's acting credits include leading roles in over 50 productions, most notably the roles of Grantaire, Javert, and Thenardier in the Broadway and national touring companies of Les Miserables, Fredrik in A Little Night Music for the Pine Mountain Music Festival, Pete the Barber in the world premiere opera Rockland, George Jr. in the original company of Utah! The Musical at the Tuacahn Amphitheatre, and Nathan Detroit in Guys and Dolls at the Interlochen Center for the Arts. Paul is currently a professor of theatre at Northern Michigan University, and a member of the Actors Equity Association.

Jill Grundstrom (Choreographer) has a B.S. from NMU in Secondary Education with majors in English and French, and a M.A. in Dance Education from New York University.  She is also certified in the Luigi Jazz Technique, American Ballet Theatre’s National Training Curriculum, and is a Certified FLX Conditioning Specialist.  She is currently pursuing an Ed.D. in Educational Leadership, as well as writing new Character Dance and Partnering curricula for American Ballet Theatre (America’s National Ballet Company®) in New York City.   Jill has choreographed over 30 full-length musical and dance productions in New York City, Los Angeles, Italy, and here in the Upper Peninsula, including a full-length, original ballet, East of the Sun, West of the Moon (NMU), and recently choreographed an independent feature-length film, Our State Fair.  She has also previously worked with Superior Arts Youth Theatre, the National Dance Education Organization, American Ballet Theatre, New York City Ballet, and Fox’s So You Think You Can Dance.

Clair Kaminski (Production Stage Manager) is a junior at NMU working towards a BFA degree in Theatre Technology and Design for Stage Management. Clair has worked on several shows at NMU including What We Leave Behind (ASM), Significant Other (PSM), and Romeo and Juliet (Costume Designer). Going back to in-person rehearsals in the theatre and dance studio has felt like coming home to Clair, and she has loved every minute of working on the Spotlight Variety Show. The livestream aspect of the this production is new to her, but she looks forward to trying new things like this in theatre.

Keli Crawford-Truckey (Properties Artisan) serves as a teacher, director, and properties master at NMU. Recent FRT directing credits include The Full Monty, Proof, Sweeney Todd, Bears, Doubt, Harvey, and Into the Woods. She has worked as a stage manager/staff member on the Broadway and national touring companies of Les Miserables, and on off-Broadway productions including And Miss Reardon Drinks a Little at the Producers Club and Cloud Nine at the Bank Street Theatre in NYC. Keli holds a degree in Directing and Performance from the University of Nevada, Las Vegas.

Oskar Martínez (Bass) is a third-year music major at Northern Michigan University pursuing a Bachelor of Arts in Music degree with an emphasis on bassoon performance. Oskar is the bassist for the NMU pit orchestra this semester and plays bass for other ensembles like the jazz band and combo. He has done pit music on multiple instruments for high schools, the Vista Theatre in Negaunee, and the Superior Arts Youth Theater. Additionally, he is the principal bassoon for the Marquette City Band, second bassoon/contrabassoonist for the Marquette Symphony Orchestra, and plays bassoon and bass in the Negaunee City Band.