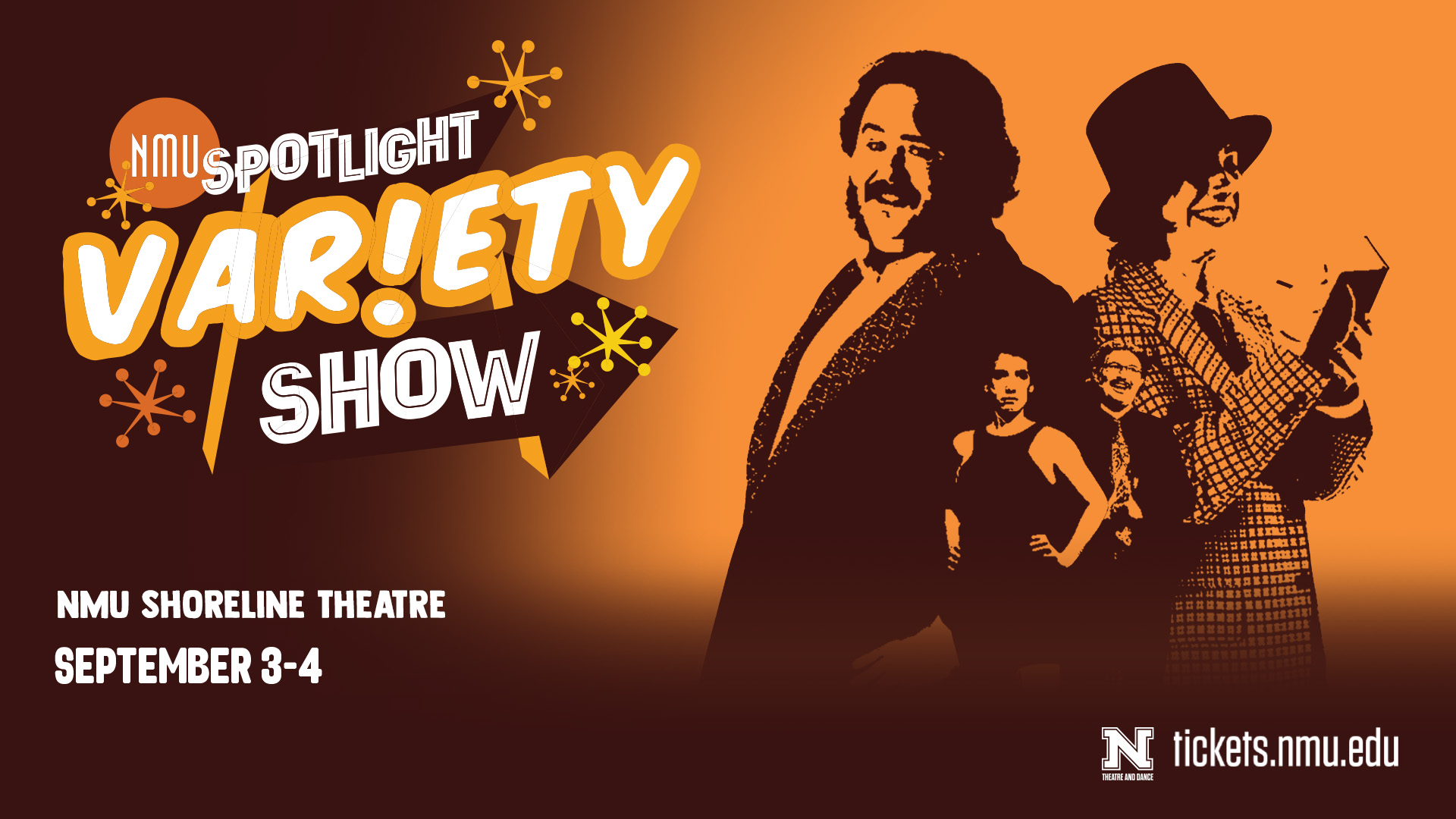 A Celebration of NMU's Brightest Stars
Welcome back to campus, Wildcats! Enjoy a beginning-of-the-year showcase of our theatre and dance students featuring a collection of scenes, songs, monologues, and dance pieces.

From Beautiful: The Carole King Musical
Music and Lyrics by Carole King
Performed by Emily Fitzpatrick

I Can't Hate You

I Know Where I've Been

When He Sees Me

From 35mm: A Musical Exhibition
Music and Lyrics by Ryan Scott Oliver
Performed by Rhiannyn McCauley

A Monologue from the 1978 film "Halloween" dir. John Carpenter
Performed by Aaron Knaus

As Long as He Needs Me

From Oliver!
Music and Lyrics by Lionel Bart
Performed by Kaylie Goodno

From You're a Good Man, Charlie Brown
Music and Lyrics by Clark Gesner
Performed by DaShawn Mitchell

From West Side Story
Music by Leonard Bernstein, Lyrics by Stephen Sondheim
Performed by Brenton Fitzpatrick

Bryson Krieger is a freshman this year at NMU and he is excited to be a part of the theatre program. Currently, Bryson is a physics major with an engineering concentration and a theatre minor. Being introduced to the theatre at a young age, he has grown to love taking part in many different types of productions including community theatre (The Little Mermaid, Beauty and the Beast, It’s a Wonderful Life, etc.) and high school theatre (Into the Woods Jr., Peter and the Starcatcher, Little Shop of Horrors, etc.). When not on stage, Bryson enjoys hiking, biking, and playing his trumpet.

Shannon Knowski was involved in many musicals during her high school years at Port Washington High School such as Cinderella and Tarzan, and also at Memories Dinner Theater (The Marvelous Wonderettes and Man of La Mancha). Shannon also played Dorothy in The Wizard of Oz at Lakeshore Productions. She has been involved in productions with Port Rec theatre since she was four years old, including shows such as The Little Mermaid (Carlotta) and Sleeping Beauty (Princess Aurora). Shannon is a freshman at NMU and pursuing a BFA in Musical Theatre. She is thankful to her family and friends for all of their support.

Sophie Sam is a senior theatre and entertainment arts student at NMU. Recent theatre credits include roles in the 14th St. Y Lab with Rising Sun Performance Company, The Raven in SPAA’s production of Nightfall with Edgar Allan Poe, and the ensemble in NMU’s production of Sweeney Todd. Film credits include The Kid in Season 2 & 3 of Northbound, and a role in Opening Ceremony, a short film produced by Higher Ground Festival in New York City. Also a director, Sophie has directed Screaming, Humming and an/(one’s) ivory tower at NMU. This winter, she will be directing Next to Normal at the Forest Roberts Theatre.

Emily (Strazzinski) Fitzpatrick is a music teacher at Lakeview Elementary School in Negaunee. She has a bachelor’s degree in music education from NMU and a master’s degree in educational technology from Michigan State University. Acting credits include Lake Superior Theatre: Stage and Screen Cabaret, Spamalot, Beacon on the Rock; NMU: The Full Monty, Harvey, Hello Dolly, Tell-Tale. Music direction credits include Sweeney Todd, Into the Woods, Scrooge, Little Shop of Horrors, The 25th Annual Putnam County Spelling Bee, and Rent, all at NMU. She lives in Marquette with her husband, son, and daughter.

Brenton Fitzpatrick holds two degrees from NMU: an M.A. in educational administration and supervision and a B.S. in secondary education with a minor in performance theatre. Most recent theatre productions at NMU include Holdin’ Our Own, Fallujah, Actletes, The Full Monty; at the Vista Theatre: Jersey Boys revue; and at Lake Superior Theatre: Anatomy of a Murder. He currently teaches social studies at Bothwell Middle School and lives in Marquette with his wife, son, and daughter.

Amarae' Robinson is a third year transfer student in the BFA Musical Theatre program with a technical theatre background. Some of her favorite productions include In the Heights and Bamboozled, a commedia del arte show. Spotlight will be her first performance with the NMU Theatre and Dance Department.

Cassidy Hope Olson is a junior at Northern Michigan University. They are currently working on applying to be a part of the Independently Created Program at Northern. Cassidy is planning on studying content creation and strategy. They are a content creator on TikTok, sharing their life experiences from a different perspective, telling unique stories, and creating safe online social spaces for all. @cassidyhopeolson

Aaron Knaus is majoring in theatre with a concentration in performance, while seeking an outdoor recreation minor, and he intends to graduate next spring. Aside from acting, he is a performer of electronic keyboards, who's drawn to a range of music genres including classical, jazz fusion, and prog rock. Being a U.P. native, Aaron is also drawn to the remote woodlands and waters of the local land, where he enjoys fishing, hiking, and skiing.

Kaylie Goodno is a sophomore at NMU double majoring in musical theatre and music. She is so excited to start the year off by performing in the Spotlight Variety Show and hopes you enjoy!

Kent Brock and Gracie Fries have been devoted to one another for the past 8 years. Building a strong bond through music and entertainment, their journey began in middle school when they started their first band. The rest is history! Kent found his love for drumming 16 years ago and added other instruments along the way, such as the saxophone, piano, and guitar. He has performed in several public band performances and shows including Rock the FRT (2017 and 2018), the Island Resort and Casino’s 2020 Battle of the Bands, and the Spotlight Variety Show in 2020. Gracie is in her senior year, pursuing a BA in Dance with a concentration in business. With twenty-one years of dance experience, many performing opportunities have allowed her to expand her knowledge and love for the musical arts. She was a pro-dancer in the 2019 “Dancing With Our Stars - Marquette County Style, Disney Edition” and co-choreographer for the 2019 SAYT production of Frozen Jr. Gracie is currently teaching at Julie’s Top Hat Dance Studio in Kingsford and at Dawn Dott Dance Studio, as well as choreographing for this year's CO/LAB COLLECTIVE. Kent and Gracie cannot wait to perform Rhythmic Connection for a live audience and hope you enjoy the show!

Austin Graham is a freshman at Northern Michigan University and is currently studying theatre technology and design. Before attending NMU, he graduated from LaSalle High School in St. Ignace, MI. Austin has had a lot of experience with the performing arts and theatre; throughout his four years of high school, he was a member of the LaSalle High School Drama Club. In the summers he had off from school, his passion for the arts and entertainment didn’t take a break. For four summers, Graham participated in The Young Americans Performing Arts Summer Camps, and has just recently started getting into the music scene.

Sophie Shrauger is a sophomore BFA Musical Theatre student and she is overjoyed to be back at Northern for her second year of performances! She is very eager to get back to work and start creating magic on stage with people once again! Last year, Sophie’s favorite experience at Northern was playing Romeo in NMU’s Romeo and Juliet. She is extremely excited to spread the word about the upcoming theatre and dance season! Make sure to come out and see the world premier of Above The Timberline, in which Sophie will be portraying Athena the Falcon!

Zoë Hajec is a freshman in the BFA Musical Theatre program. She is interested in writing and sign language. In her free time, she likes hanging out with friends and teaching martial arts. Zoë wants to become a performer, director, writer, and teacher. She is very excited to be a student of the NMU Theatre and Dance Department!

Seth Bowen is seeking a BFA in Theatre Technology and Design and plans on becoming a professor of theatre someday! He is originally from McNaughton, WI and is currently attending his senior year at NMU. Seth has taken part in many different performances here at NMU, including Sweeney Todd (Police Officer/Ensemble), The Full Monty (Malcolm), Cats (Gus), North x North Coast (What If? Scenic and Props), and Romeo and Juliet (Co-Lighting Designer). Seth is super excited to be a part of this collection of shows and is looking forward to watching the scenery aid the telling of each story. It has been an amazing, fun learning experience!

Braeden Ingersoll (Technical Director), originally from Des Moines, Iowa, comes to NMU from Aspen Colorado where he served as the Technical Director for their summer season. Additional professional credits include Technical Director with Des Moines Metro Opera and Assistant Technical Director with Creede Repertory Theatre. Braeden recently graduated from Florida State University where he received his MFA in Technical Production. Braeden is excited to be making theatre come to life after over a year and a half without. “The last year has challenged us to tell them in new ways, but it is exciting to build, make, and create in-person once again!”

Toni Danz (Production Stage Manager) is a senior at NMU this year. She is pursuing a BFA in Theatre Tech and Design with a focus in stage management. Over the summer, she was home in Illinois working for a community theatre. At her job she did a lot of lighting which was really exciting for her to learn more about. She was excited to see all the new faces at auditions, and she can't wait for everyone else to see them too. She loves the variety that this variety show has. She's overjoyed to be working on a live show again and is hopeful for the rest of her senior year!