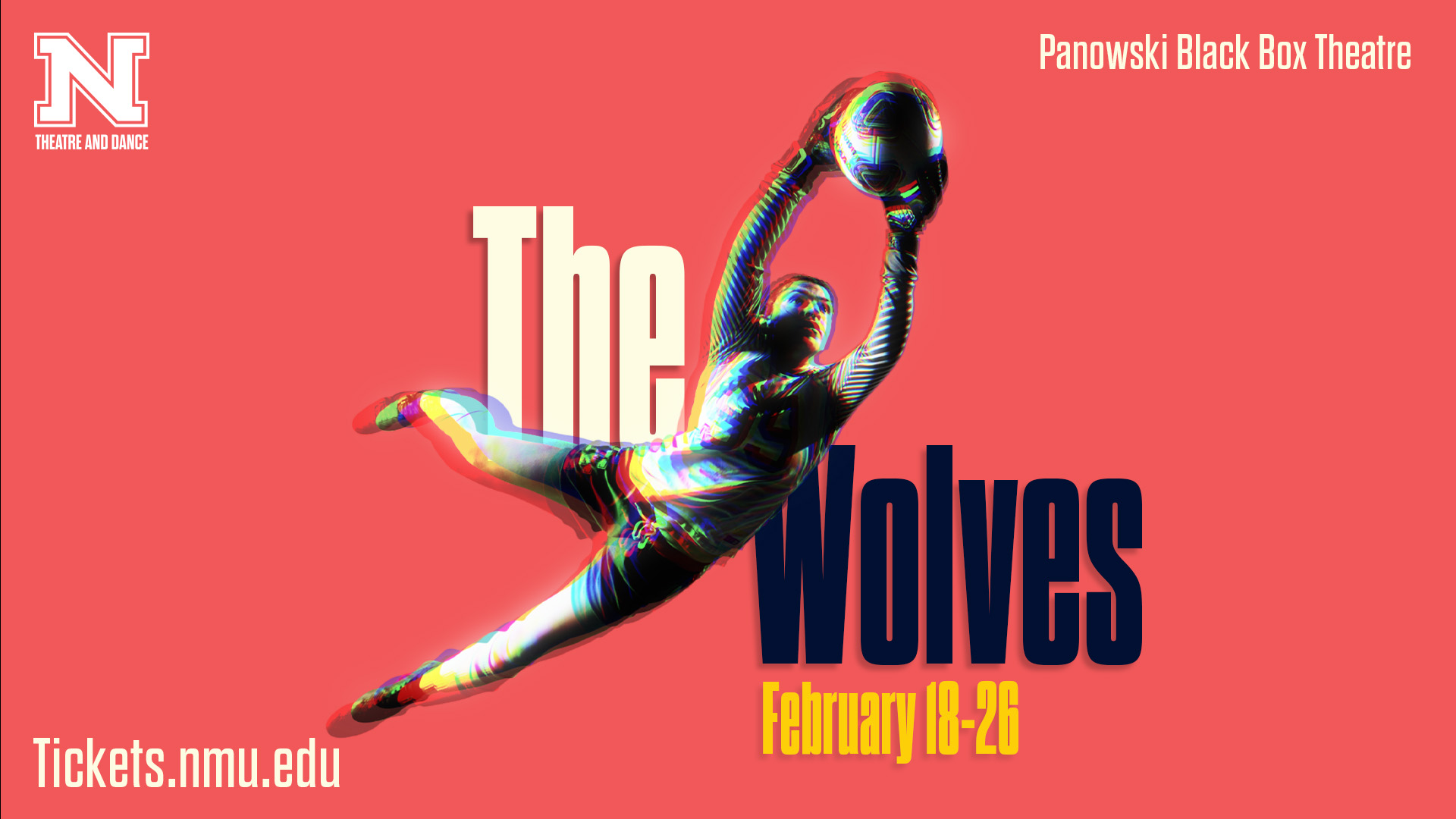 A Poignant Coming-of-Age Play
Written by Sarah DeLappe
This portrait of teenage self-discovery centers on a girls soccer team over the course of several weeks. As they run their pre-game warmups, they gossip about war, sports, pop culture, and their relationships, each one struggling to find her individuality amidst the group. A nuanced, authentic portrayal of adolescence and femininity, this effervescent tragicomedy is a must-see.

NOTE: This show is rated PG-13 and contains strong language and some mild adult themes that may not be suitable for younger audience members.

The Wolves is presented by arrangement with Concord Theatricals on behalf of Samuel French, Inc. www.concordtheatricals.com

Keely-Shaye Hanson (#11) is a second year theatre major here at NMU. She has performed in several Spotlight Variety Shows, A Christmas Carol, and Above the Timberline. She also helped out behind the scenes in Elf the Musical. She is super excited to be a part of this interactive show and wants to thank her family, friends, and fellow cast/crew members for all their help to get this show on its feet!

Jaiden Cunningham (#25) is a junior at Northern Michigan University. She is from Muskegon, MI and graduated from Mona Shores High School in 2020. She is a microbiology major and is minoring in environmental science. This will be her first production at NMU.

Sophie Shrauger (#46) is a sophomore BFA Musical Theatre student, and is so excited to be working with such a wonderful team as #46, the new girl! This is Sophie’s ninth show at Northern Michigan University, and she is so ready to share the world of The Wolves with you all! Keep an eye out for flying soccer balls!

Kyra Skinner (#2) is in her third year at NMU and is ready to make her acting debut! Kyra is a double major in dance and psychology with a developmental concentration. She is so excited to start winter semester with her fourth show of the school year and sixth of her NMU career! This is her first time in a play and she has enjoyed learning acting from Keli Truckey and her cast. She felt so overwhelmingly welcomed coming into this show later than the other girls but feels so lucky to have been granted this opportunity. Kyra welcomes everyone to open themselves up to see what The Wolves are all about!

Emma Wetzel (#7) is a freshman at Northern Michigan University. She was born and raised in Los Angeles, CA and was recruited to play women’s lacrosse here at NMU. She came in on the pre-med path but soon decided that her passion is film and photography and is currently an art and design major with a focus in digital cinema. This will be Emma’s first production at Northern and she is extremely excited to get back into theatre and hopefully continue as the years go on.

Rhiannyn McCauley (#8) is a freshman pursuing a BA in Theatre and Entertainment Arts at Northern Michigan University. She has previously performed in Above the Timberline and in the 2021 Spotlight Variety Show, as well as working in the costume shop.

Maya Moreau (#14) is a freshman BFA Musical Theatre student at Northern Michigan University. She has appeared in several productions this year including Above the Timberline and Elf the Musical. Before her studies at NMU, she attended Edsel Ford High School in Dearborn, MI, practicing cello performance, musical theatre, and music education.

Zoë Hajec (#00) is a first-generation college student majoring in musical theatre. She has also been involved at NMU in the Spotlight Variety Show, Above the Timberline, and Elf the Musical as Charlotte. She enjoys painting, podcasts, learning sign language, and writing. She has really enjoyed being part of The Wolves because it has encouraged her to expand her abilities as an actor. Zoë would like to thank her friends and family for all the support they've given her through this process.

Maisie James (Soccer Mom) is a freshman at NMU working towards degrees in secondary English education and theatre. She has appeared previously in Above the Timberline as Elizabeth, and will be featured in the ensemble for The Producers. She is absolutely delighted to be playing Soccer Mom in The Wolves. This role has been incredibly challenging and has pushed her to become a better actress with every rehearsal. She would like to thank everyone in the cast for their support, as well as her family for traveling to continue to support her career and craft.

Keli Crawford-Truckey (Director, Properties Designer) serves as a teacher, director, and properties master at NMU. Recent FRT directing credits include Above the Timberline, The Full Monty, Proof, Sweeney Todd, Bears, Doubt, Harvey, and Into the Woods. She has worked as a stage manager/staff member on the Broadway and national touring companies of Les Miserables, and on off-Broadway productions including And Miss Reardon Drinks a Little at the Producers Club and Cloud Nine at the Bank Street Theatre in NYC. Keli holds a degree in Directing and Performance from the University of Nevada, Las Vegas.

Seth Bowen (Scenic Designer) is a senior at Northern Michigan University and is graduating in April! He has designed the scenery for a few smaller productions and has coordinated some others earlier this school year. He has been a part of many different productions at the Forest Roberts Theatre in many different areas. Seth is very excited for more design work in the future and is planning on attending graduate school to further his education in scenic design. In preparation for The Wolves, Seth has learned a great deal and really enhanced his eye and passion for theatre. He hopes that you enjoy the show and find your back amidst the pack.

Clair Kaminski (Costume Designer) is a senior BFA Theatre Technology and Design student who enjoys dabbling in costume design and is thrilled to have had the opportunity to work on The Wolves. Clair has been a longtime lover of soccer and has really enjoyed the experience of designing the costumes for this play, especially the jerseys. She is so grateful to have been able to be a part of this team and would like to thank her family, friends, and the theatre and dance faculty for supporting her throughout this process. She hopes you enjoy the show!

Lex van Blommestein (Lighting Designer) is a theatre designer based out of Marquette, MI. While he currently teaches at Northern, he also maintains a prolific national and international design career. Lex earned his MFA from Wayne State University's Hilberry Repertory Program in Detroit, and has lived, designed, and taught in Edwardsville, IL; St. Louis, MO; Cincinatti, OH; Raleigh, NC; Memphis, TN; Milwaukee, WI; Detroit, MI; Lansing, MI; Windsor, ON; and Amsterdam, NL, to name a few. In addition to his love for scenic design, he enjoys using design to explore audience reaction, interaction, and emotion, and to create experiences involving virtual reality and augmented reality as well as immersive design.

DaShawn Mitchell (Sound Designer) is a freshman in the Musical Theatre BFA program with a background in music and also works in technical theatre. In his time here at Northern, he has appeared as Sam in Above the Timberline, Walter in Elf the Musical, and Henry in Next to Normal. Lately, DaShawn has been working as Sound Designer for The Wolves and looking forward to his debut as leading man, Max Bialystock, in the upcoming spring production of The Producers.

Ethan Rickert (Technical Director) is a senior in the BFA Theatre Technology and Design program and this is his first time as Technical Director for the Forest Roberts Theatre. However, he has been the assistant TD for multiple productions, including Romeo and Juliet, Elf the Musical, and many more. He was very excited to take on this opportunity and the challenges it provided, and he's looking forward to doing more technical direction for future shows, both here at the Forest Roberts Theatre and elsewhere.