History of the Center

Native Americans: In the early days few Native American students attended Northern Michigan University. Those who did were often met with prejudice from others. At various times, Native American speakers came to campus and talked to the weekly assembly or at public lectures. In January 1936, Charles Eagle Plume came to Northern to present a program called Making Medicine, in which he interpreted Native life through song and dance. Unfortunately, there is little information available about the early days.

Jim Carter, who was in the Office of Research and Development, was interested in developing a special Indian culture and education program. Carter wrote to Senator Robert P. Griffith in 1970 concerning the development of an Indian educational program geared toward Indian cultural heritage, interests, and abilities. The concept was discussed with a number of faculty members who were interested in the project and the idea of a Center for Chippewa Education or a Chippewa Studies Center emerged. The three basic courses would be: Native language, folklore, history and anthropology. A possible fourth concentration would be in arts and crafts. On June 29, 1970, there was an important meeting with the NMU Chippewa Education and Cultural Program Committee and the Inter-Tribal Council of Michigan (ITC). The latter group represented all the tribes. Many Native Americans from all over the state attended.

As time passed, there were a number of developments in this area. At first, Carter was director as part of his Research and Development duties until Robert Bailey arrived. The Office of American Indian Programs was created, and Bailey became director (1972-1979). This position was gradually incorporated into the Diversity Programs and the directorship changed. Rosemary Germill Suardini, 1979-1981; Nancie Hatch, 1981-1995; Rose Allard, 1995-1997; and Michael Teesdale-Sherman, 1997-1998 served in various leadership roles.

Special courses in anthropology were developed by Marla Buckmaster and in history by Russell Magnaghi. Soon after, a Native American Studies Program was developed on paper, but was not approved.

Between 1971 and 1983, Carter and the Native students developed the very successful Nishnawbe News. There were a variety of cultural programs and lectures presented on campus. Indian Awareness Week which began in 1971 was held annually and speakers and programs were featured. Later, there were lectures by Native American speakers funded through the Martin Luther King, Jr.-Cesar Chavez-Rosa Parks lecture series. Seminars, workshops and courses were also presented on reservations in the Upper Peninsula. On a number of occasions, Native American persons were awarded honorary degrees from Northern: Beatrice Medicine (Humane Letters, 8/79), Vine Deloria, Jr. (Humanities, 5/1991) and LaDonna Harris, (Humanities, 4/1994). The last two individuals were commencement speakers.

During Dr. Tibbetts’ time at NMU, he began the tradition of a "Moccasin Blessing" in the fall of 1996. The gathering's purpose was to introduce students to administration, faculty and staff who worked at the CNAS. President Bailey had also started at NMU in 1996. The CNAS presented her with a Pendleton blanket. The Moccasin Blessing was also designed to start the academic year off in a "good way" specifically for new Native students. 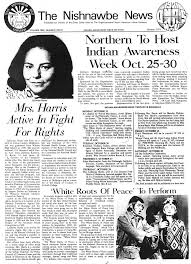 Student empowerment was extremely important to Dr. Tibbetts. Under his direction, the CNAS sent students to several conferences. Dr. Tibbetts also started the first Indian Law Day forum at NMU which was held in the winter of 1999.

Tibbetts also created the first Native American Admissions Counselor position in the fall of 1998. The position was filled by NMU alumnus April Lindala (Six Nations Mohawk/Delaware. Lindala represented the Center at college fairs and schools in Michigan, northern Wisconsin and northern Minnesota. During her time at the CNAS, Lindala also taught "Culture and Community of the Great Lakes Anishinaabe." Lindala was also the advisor to the Native American Student Association.

After Dr. Dennis Tibbetts resigned from his position in 2000 Liana Loonsfoot (Keweenaw Bay Indian Community) took over as the Interim Director of the Center until Martin Reinhardt (Sault Ste. Marie Tribe of Chippewa) was hired to fill the position in 2001 as the first full time director of the Center for Native American Studies. One of Reinhardt's first actions was to expand the NAS minor to include courses in Education, Tribal law and government, and a service learning component.

Reinhardt was instrumental in establishing a new outreach initiative for the center that focuses on working with tribal education departments, tribal schools, and Indian education programs at public schools to develop standards based Native American inclusion plans. He also brought Anishinaabe News back in an internet only form. Dr. Reinhardt left the position of Director in January of 2005. However, maintains connections by teaching on-line courses.

In 2002, Traci Maday (Bad River) was hired as the first Assistant Director for the Center. This was made possible through collaboration between the Center and the NMU Charter Schools office. Maday was a liaison between the Center, the Charter Schools office and the two tribal charter schools at Hannahville and Sault Ste. Marie. With her background in education, she was vital to the continued growth and development of the Center's outreach efforts on Native American Inclusion. Ms. Maday left NMU in June of 2005.

In August of 2003, the Center moved from Magers Hall to the newly renovated Whitman Building. Included in the renovation was the creation of a fire site in the wooded area adjacent to the Whitman parking lot. The fire site is intended for academic, ceremonial and cultural purposes. In January 2005 April Lindala accepted the Interim Director position when Dr. Reinhardt relocated to Tempe, Arizona.

The CNAS Advisory Board created the Faculty Affairs Committee, made up of full-time faculty from various departments at NMU in the fall of 2005. The Faculty Affairs Committee was designed to serve as a department’s executive committee. Since the Center was not an Academic Department, it was necessary to add such a component to the already existing CNAS Advisory Board.

Since 2005, the Anishinaabe News has returned as a student-run paper and offered in a print format with additional availability through the internet.

In May 2007 it was announced that April Lindala would serve the Center as the permanent Director.  In Fall of 2007, Dr. Adriana Greci Green and Kenn Pitawanakwat (Odawa) joined the full-time faculty at the Center for Native American Studies both having three-year term appointments.

In December of 2020, a year into a global pandemic, Amber Morseau (Pokagon Band of Potawatomi Indians) was named the fourth director of the Center for Native American Studies. Ms. Morseau will be celebrating her first year as Center director December 1, 2021. In this time she has brought an extensive list of programs from the Center that focuses on student engagement, recruitment, and professional development opportunities for students. She believes in faculty autonomy in the classroom, supporting CNAS faculty in the delivery of their classes and research initiatives. Morseau strongly encourages community engagement and awareness and has contributed to statewide initiatives such as the Madoonganan Social Studies Resource Manual for the State of Michigan as well as local awareness of Missing and Murdered Indigenous Women, and Every Child Matters Movement.

In 2021 the center for Native American studies announced two of its newest programs. They have launched an Online NAS Major in collaboration with NMU’s Global Campus as well as the first Tribal College/ Public University partnership in the State with Bay Mills Community College for the Anishinaabemowin Language and Culture Teaching Certificate with the School of Education, Leadership, and Public Service.