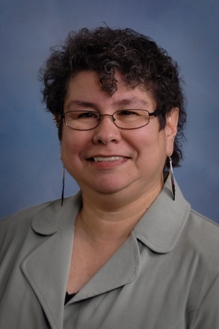 Shirley Brozzo is an Anishnaabe from the Keweenaw Bay Indian Community.  She believes that having been born in Ironwood, Michigan then moving to Marquette in 1989 makes her a real Yooper!  In 1992 she earned a bachelor's degree in business administration and in 1994 a master's in English, both at NMU.

She actively participated with the advisory board as a student representative before being hired as an adjunct instructor for the Center for Native American Studies in 1995.  In addition to teaching the Native American Experience class, she created the class, Storytelling by Native American Women.  Shirley is also the coordinator for Jump Start and GEAR UP (Gaining Early Awareness and Rediness for Undergraduate Programs), retention programs for NMU's Multicultural Education and Resource Center (MERC).

You can find her stories and poems published in more than 25 sources.  She has three adult children: Jamie, Brandi and Steven.  Her hobbies include working puzzles, reading and crocheting.

Food for Thought: A Postcolonial Study of Food Imagery in Louise Erdrich's Antelope Wife, by Shirley Brozzo, is featured in the Missouri Humanities Council Missouri Passages